Pannier Racks To The Rescue – An ADV Bike Essential

Home/Uncategorized/Pannier Racks To The Rescue – An ADV Bike Essential

Pannier Racks To The Rescue – An ADV Bike Essential

You can pretty much disregard pannier racks for small dual sport bikes but it’s more or less a necessity for big bikes.

Then again, what qualifies for “big bike”? A KLR 650 or DR 650 should already but a KTM 690 Enduro or Husqvarna 701 shouldn’t? This is where the rider community is split on the need for pannier racks but the bigger the bike gets – both in terms of displacement and size/weight – the more riders can justify the need for a set of pannier racks. For those of you who are not familiar with pannier racks and their purpose: it’s like a visor on a helmet. You can ride without it but it’s much better to ride with it!

First and foremost, pannier racks serve the purpose of carrying soft or hard panniers. Typically hard panniers are aluminum boxes. This luggage option may be the most popular but lately motorcycle specific soft luggage brands have nearly caught up. The pannier racks you see in the photo above is called X-Frame. The “X” refers to the central piece, which is essentially a mounting bracket for Rotopax fuel canister or our tool box. The “Frame” refers to the pannier racks or as some call it, pannier frames. Then we can venture into some other territories by analyzing what pannier racks can also be handy for. Well, no pun intended but they become pretty good grab handles! Often times they’re situated lower than passenger handles. 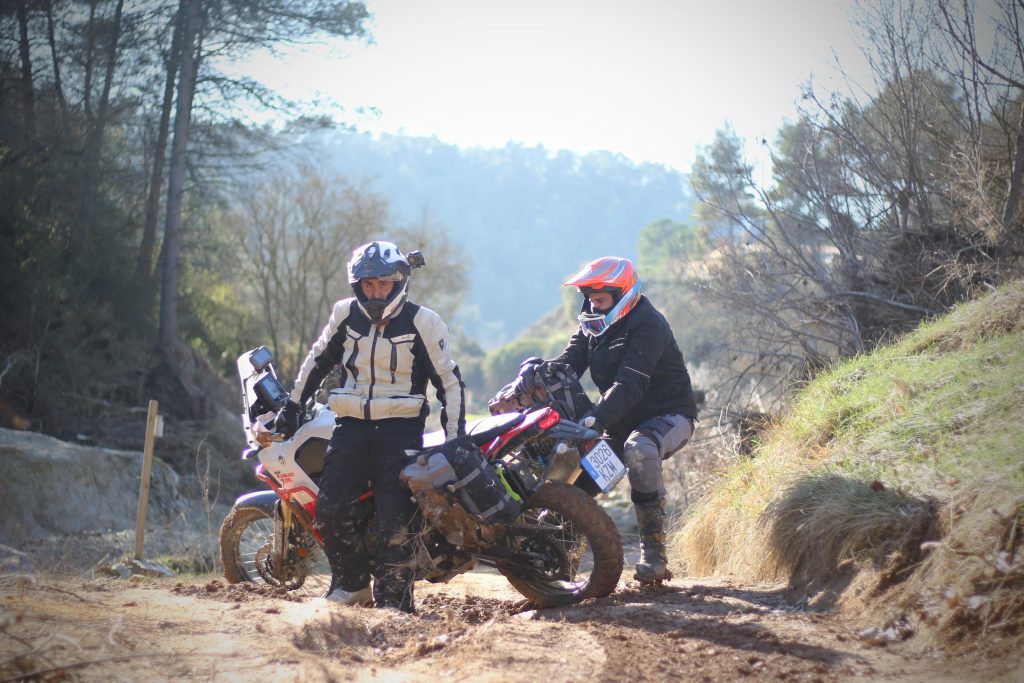 It’s best described in the photo above why pannier racks can function as grab handles. It makes lifting the bike from the ground easier! Sometimes it’s just a good anchor for tugging on in case the bike’s front end or rear end is in a ditch and you need to yank it out. You may be realizing now that pannier racks are indeed ADV essentials, aren’t you?

Another advantage of having pannier racks installed on your bike is protection. Even though we don’t approach the design and development with protection in mind but they do do a good job in most cases. It sucks when one crashes and the gorgeous and pricey exhaust muffler gets all messed up. 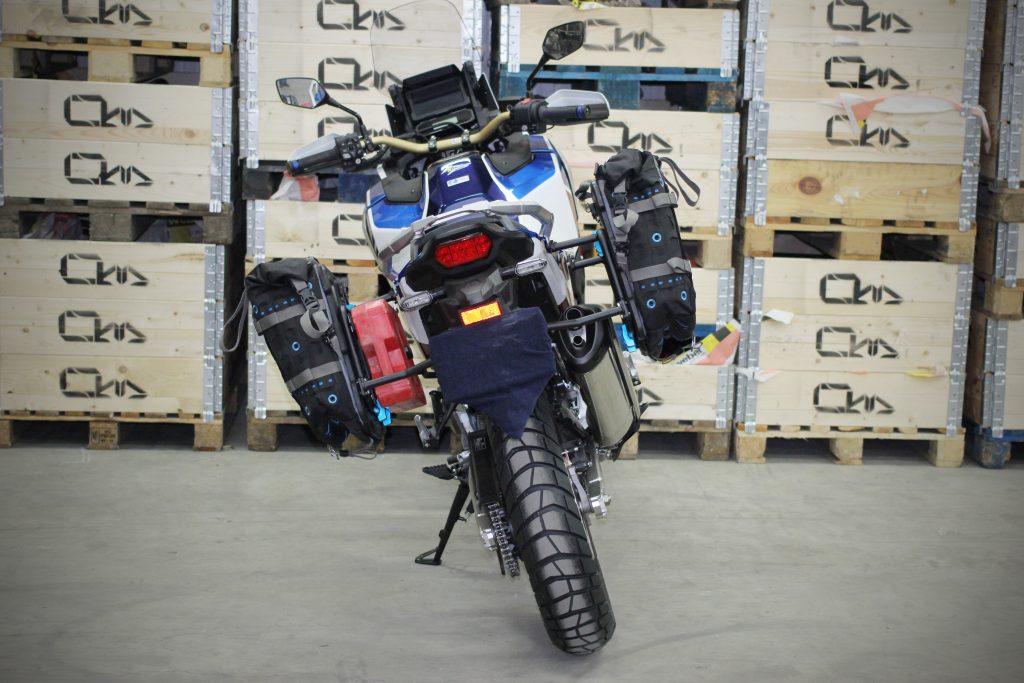 Pros and Cons: asymmetrical pannier racks make the rear end of a bike look and feel narrow(er) and if you purchase off-set panniers such as 35L+25L or 32L+22L, then you gain some luggage volume on the non-exhaust side. This however eliminates the Rotopax fuel canister option and potentially the tool box as well placed on the inside. There are some soft pannier manufacturers who offer bags with quick release mechanism. This could potentially be in the way of the passenger grab handle when sliding the bag into its place on the pannier rack. Essentially there’s less room for error with asymmetrical pannier racks.

The good news is that off-set pannier options are provided by most pannier manufacturers. Good examples are Mosko Moto ‘s Backcountry 25L and 35L and Kriega’s OS-32 and OS-22 litre panniers.

Another challenge to overcome often with most asymmetrical pannier racks (produced by other manufacturers) is the design on the exhaust side. In order to bring the aluminum cases closer to the bike, they would wrap the tubing around the top side of the exhaust muffler. However, this has caused issues for soft pannier manufacturers. Their solution was to offer an additional adapter kit ($$) to doctor this situation. Our pannier racks’ hoops are always fully vertical, thus there’s no need for adapters because there’s no “cutout” for the exhaust muffler. It’s just a “plug and play” design. 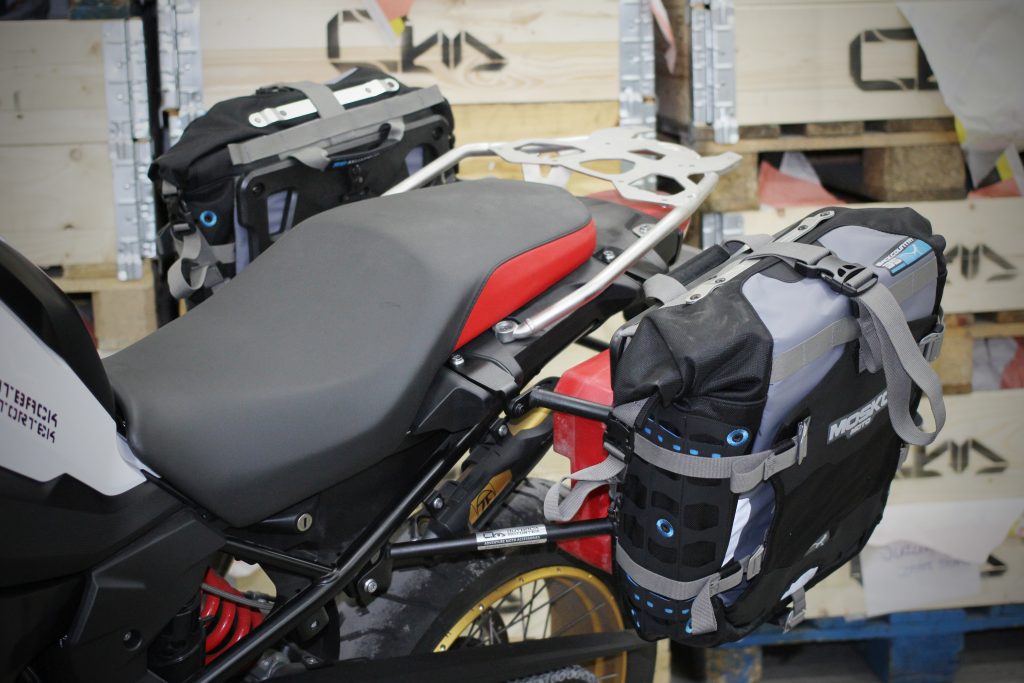 This brings up the topic: why not offer both asymmetrical and symmetrical pannier racks. The simple answer is that we’re considering it!

There’s been so much info spread out about soft panniers but what about hard panniers a.k.a. aluminum cases?

Aluminum cases are a different league. Their design and purposes is best suited for on road adventure touring, however many ride off-road with hard panniers. Essentially due to their boxy shape and hard shell (aluminum sheet) they can potentially be hazardous should the rider fall and the leg get caught under it. It’s a known disadvantage.

Our experience on a 12,000km journey was luckily all positive with our aluminum cases. No injury despite numerous off-road crashes!

Unfortunately as of now there’s no viable “in-between” solution. There have been attempts by some companies to create plastic hard cases but they just don’t seem to the get traction and their market share is tiny.

Take for example this great video from Bret Tkacs who sums it up very well:

Thus for now those who can afford to have a set of soft and a set of hard panniers will just have to settle for purchasing both options and mount the pannier based on the proposed ride.

It’s without doubt that pannier racks and panniers as well are essential parts of every adventure type motorcycle. These bikes serve multiple purposes after all: off-road trips, pavement trips, commuting, shopping, small package delivery and the luckier ones can take them around the world or roam a continent or two. 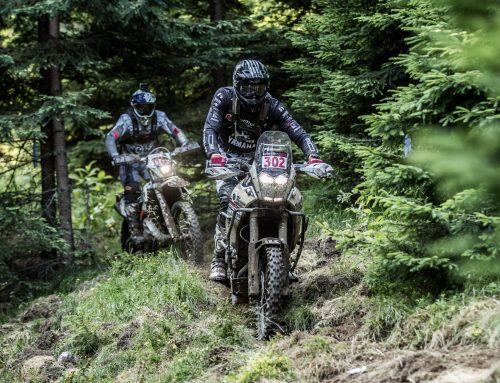 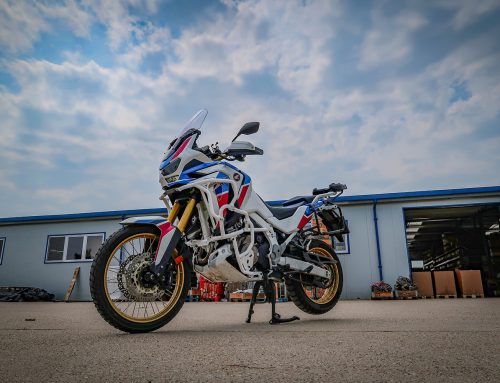 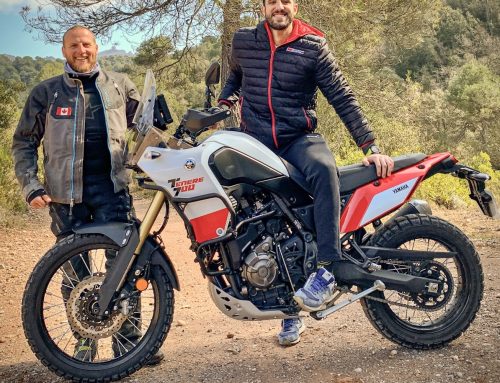