The list of bikes on display at the Munich based motorcycle show called iMot was nothing short of extraordinary.

Especially if one is to consider that Outback Motortek Germany (BikesPeak) was officially launched on the first week of 2020. I’ll begin by giving a shoutout to Thomas Stiehr for taking on the responsibility of representing Outback Motortek in Germany and Austria. From now on every order placed from either of the countries will be shipped directly from Thomas’ warehouse near Frankfurt!

Fast forward a bit to February and I found myself at the Munich airport waiting for Thomas to pick me up in a Mercedes Sprinter cube van. It was loaded with moto awesomeness! 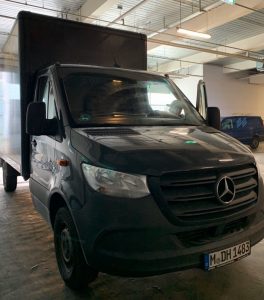 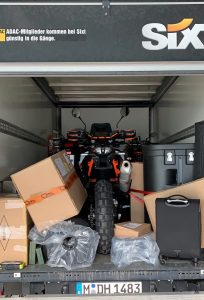 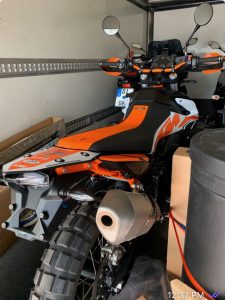 Setting up the booth took a few hours including installing products on the bikes and assembling product stands.

Our backdrop was huge, impressive and well-lit featuring a good buddy of mine catching air on his Yamaha Tenere 700. 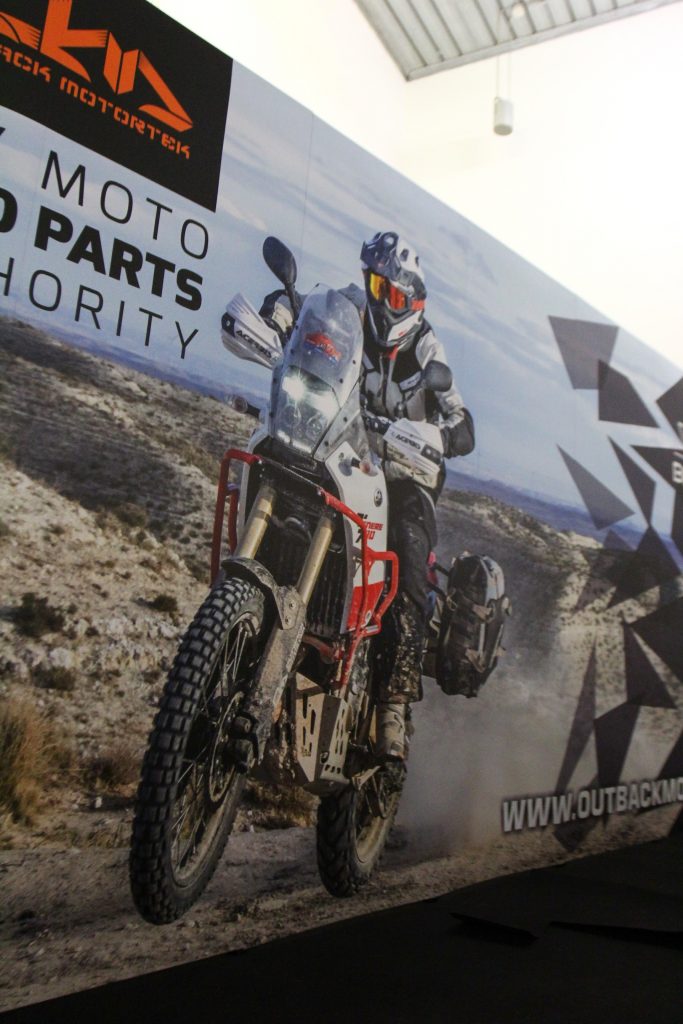 Thomas picked up the tools and began to install our Yamaha Tenere 700 crash bars, skid plate and pannier racks. Turns out that Thomas is pretty good with tools and – as former and returning customers of Outback Motortek – he finds a lot of joy in working with motorcycles! 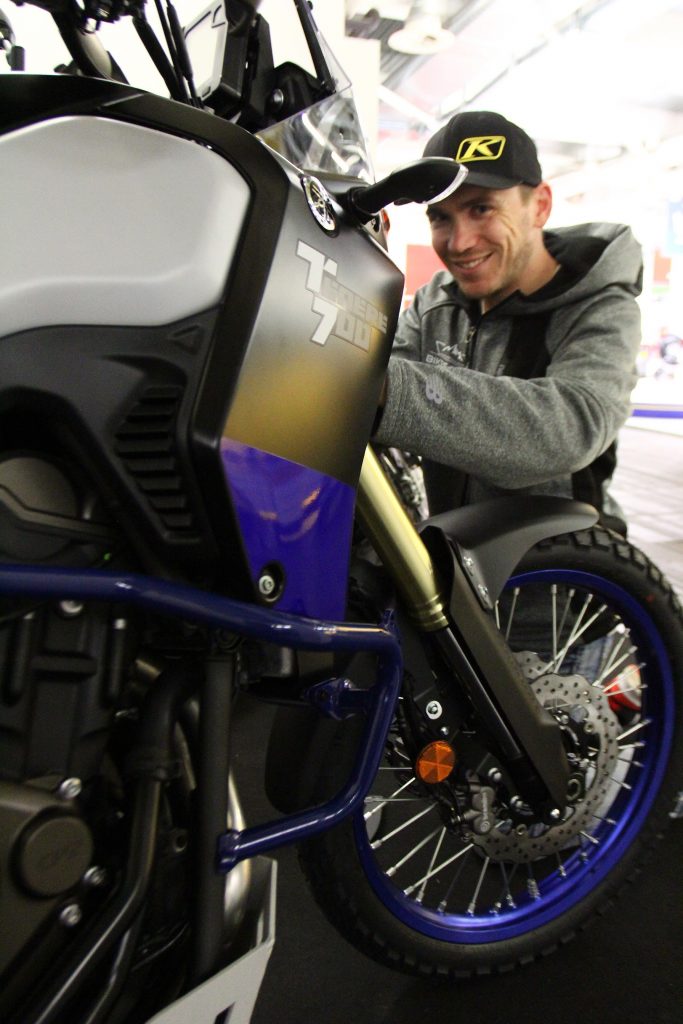 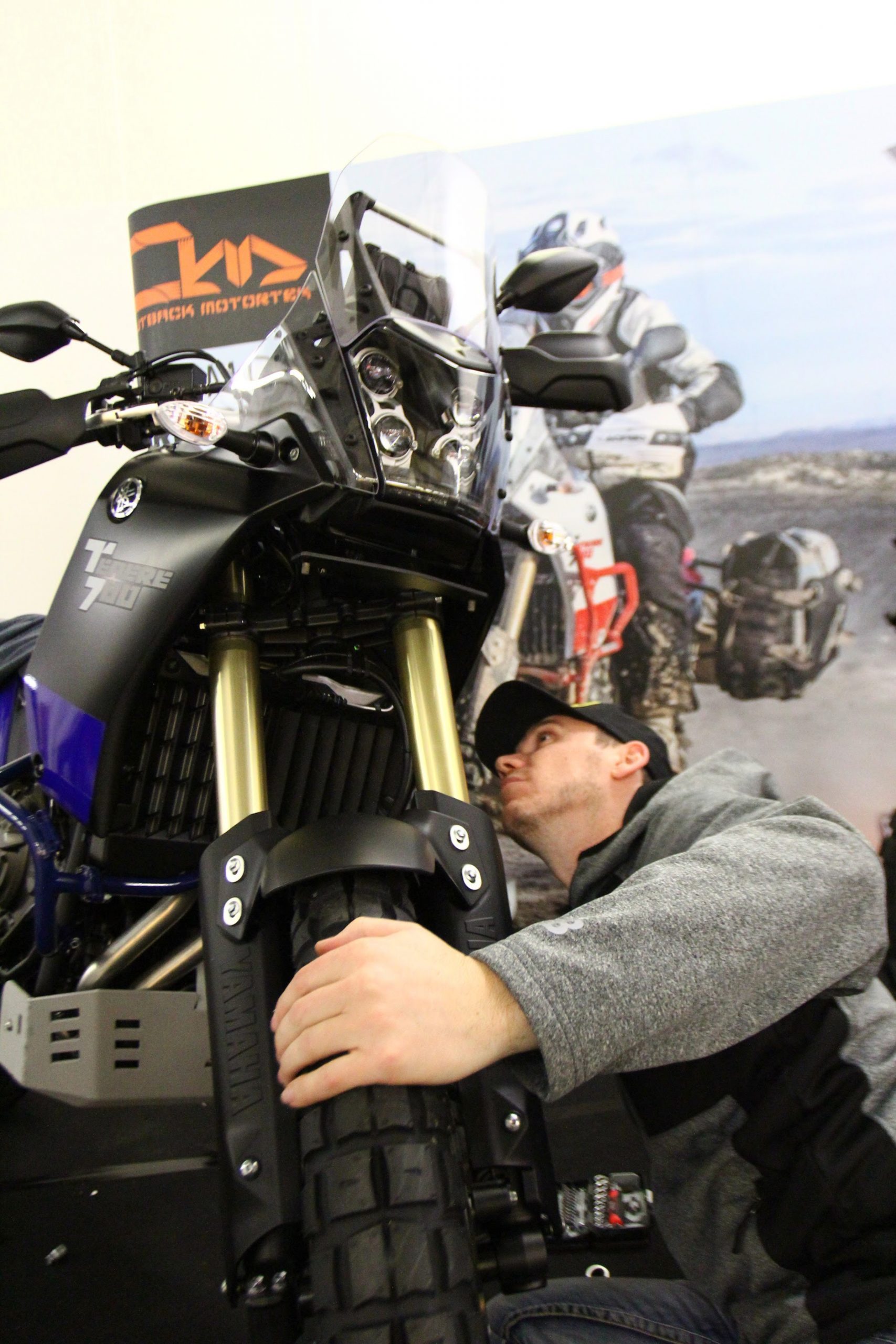 Timing couldn’t have been any more perfect. Our gorgeous, full aluminum hand/CNC crafted light brackets had just been finished in time for the expo. 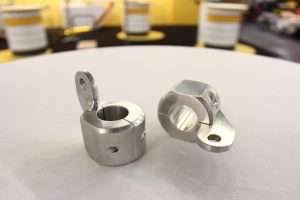 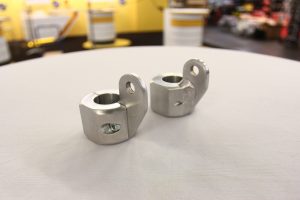 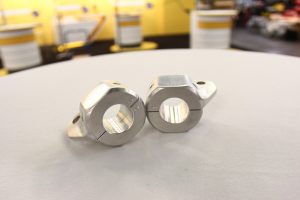 These light brackets are by far the best on the market and standout like sore thumb in the sea of cheap, mass produced “universal” brackets. Our brackets are made specifically for our tubing size: 22mm, 25mm and 27mm diameter. We’ve been told it was outrageously expensive. We know it. We also know what we offer will be justified by the superior quality and functionality. On average, quality fog or auxiliary lights cost $500-1000 a pair and the last thing one needs is loosing or damaging the lights due to poorly fitting or poorly manufactured light brackets. 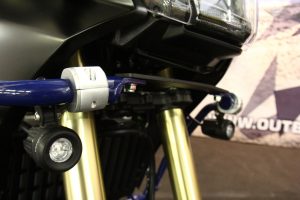 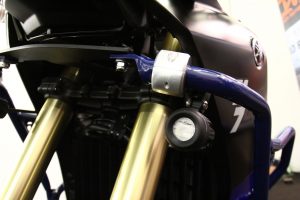 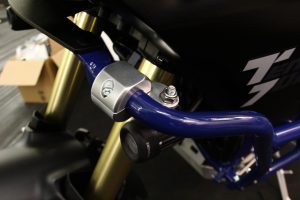 We spent a considerable time on the Tenere 700 as we had expected this bike to draw most of the attention being so new and so sought after. Thus we bolted on our new tool box sample on the pannier racks and coupled it with Mosko Moto Scout 25L panniers. 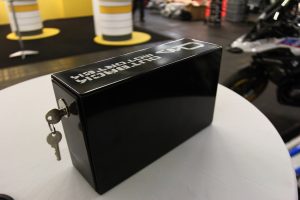 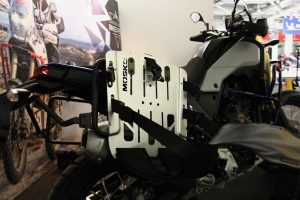 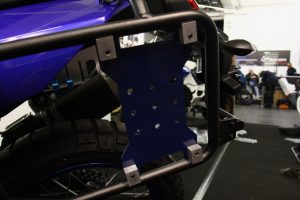 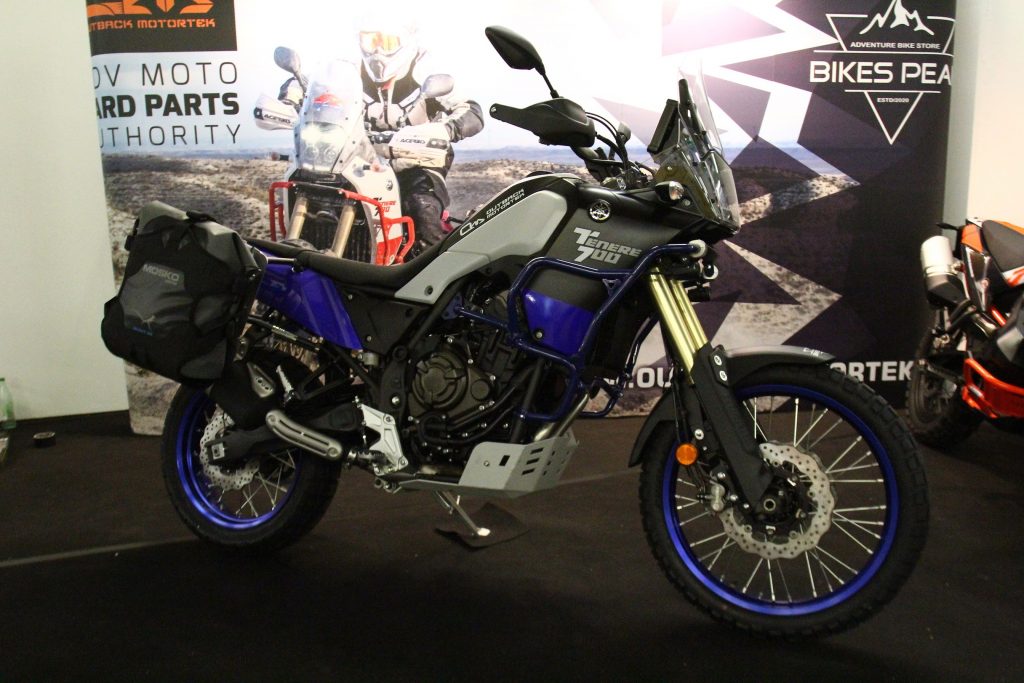 Next up was outfitting the KTM 790 Adventure R with our crash bars and skid plate combo. This only took about 15 minutes. 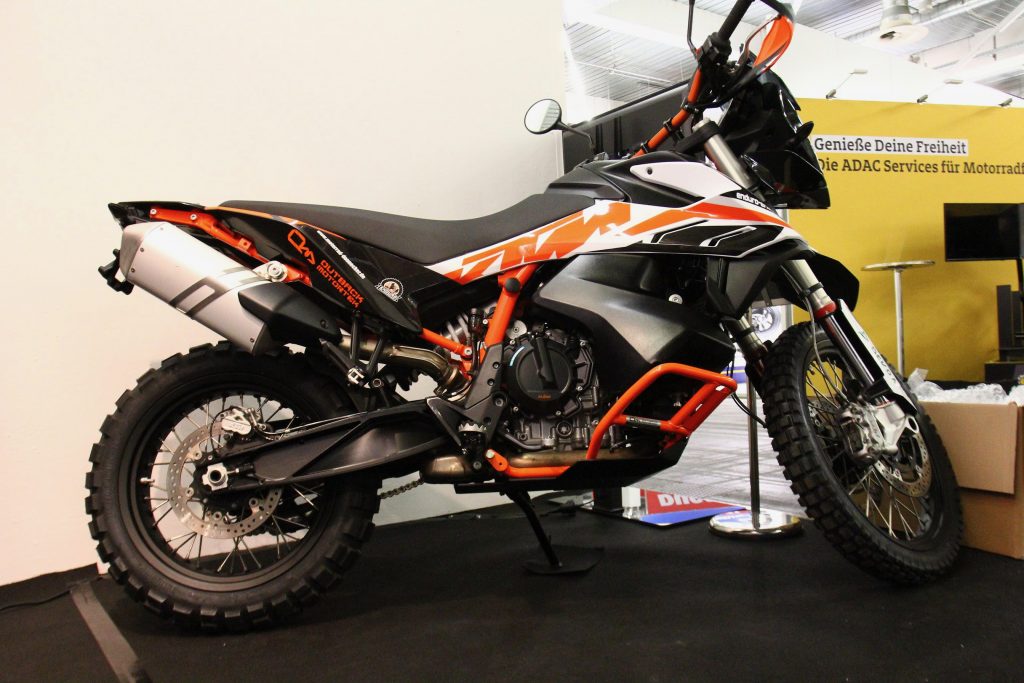 Then we rolled in one of our customers bikes, a Honda Africa Twin 1000 Adventure Sports! Gorgeous bike for sure, especially with the additional Outback Motortek Ultimate Protection Combo and aluminum light brackets installed. The light brackets are actually custom made to fit OEM Honda fog lights on our lower crash bars.

The cherry on top of the cake was Thomas’ very own BMW R1250GS. It already arrived with our full crash bars and skid plate combo installed on it but Thomas decided to spice up the look with a custom made vinyl kit! 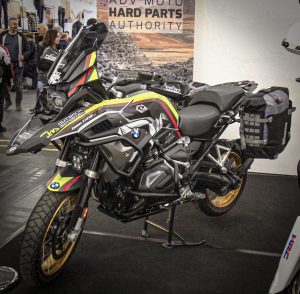 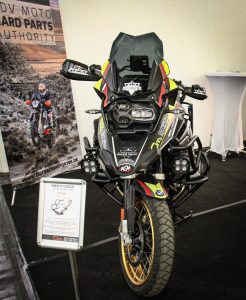 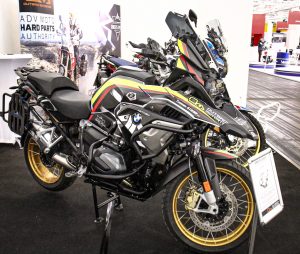 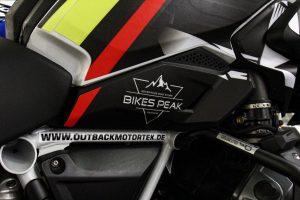 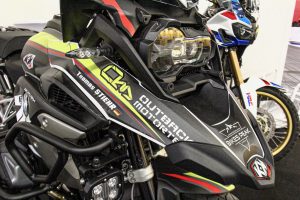 The booth was all set for the visitors finally and we couldn’t be more excited for the show. 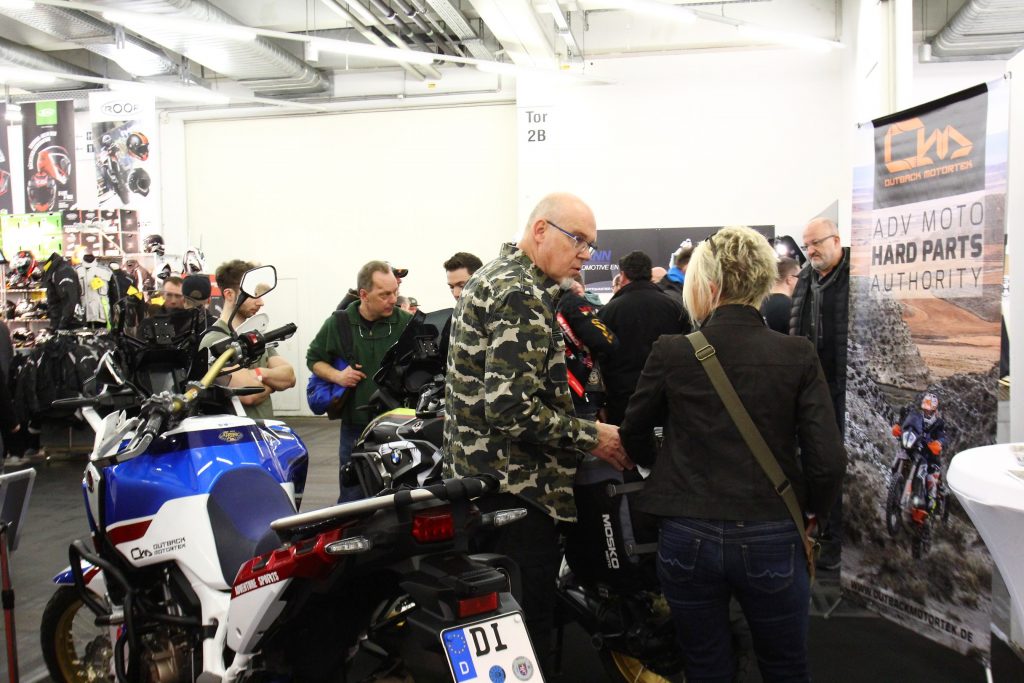 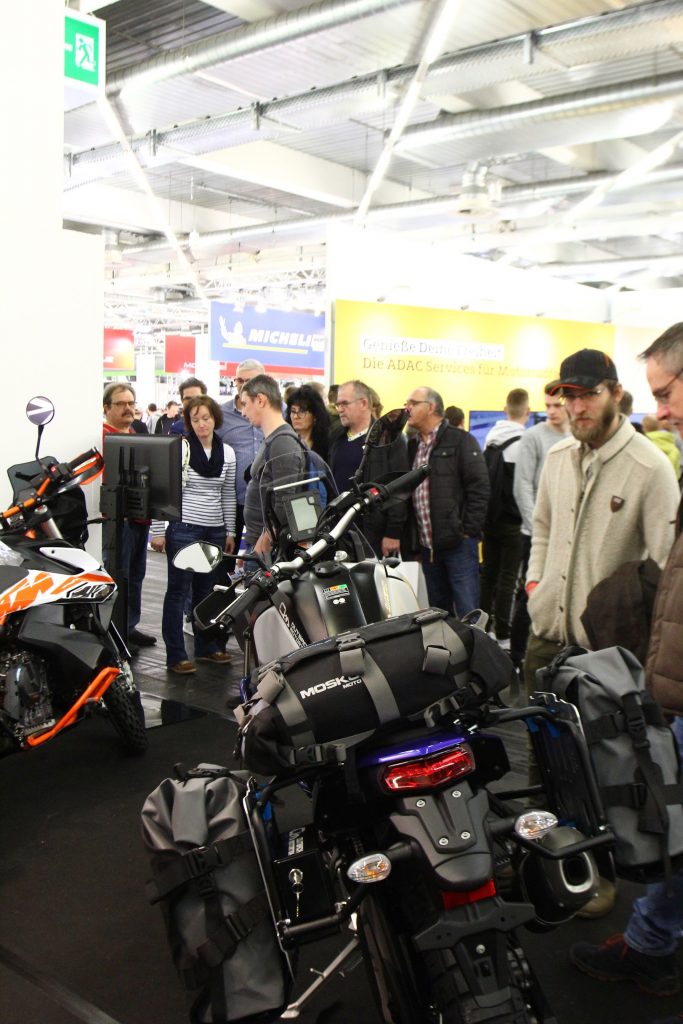 Thomas insisted that we play all the drop test videos all day on a big screen TV. I didn’t disagree. It turned out to be a great idea as we often saw small crowds gathering in front of the screen. We noticed all kinds of reactions to the drop test videos. Jaw dropping was one of them. 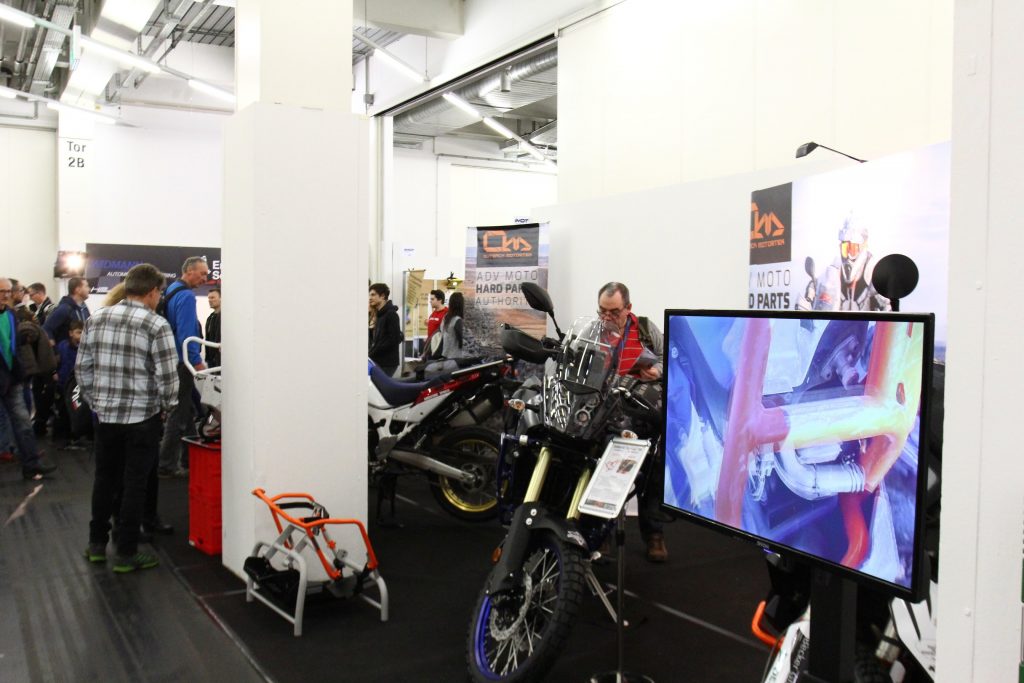 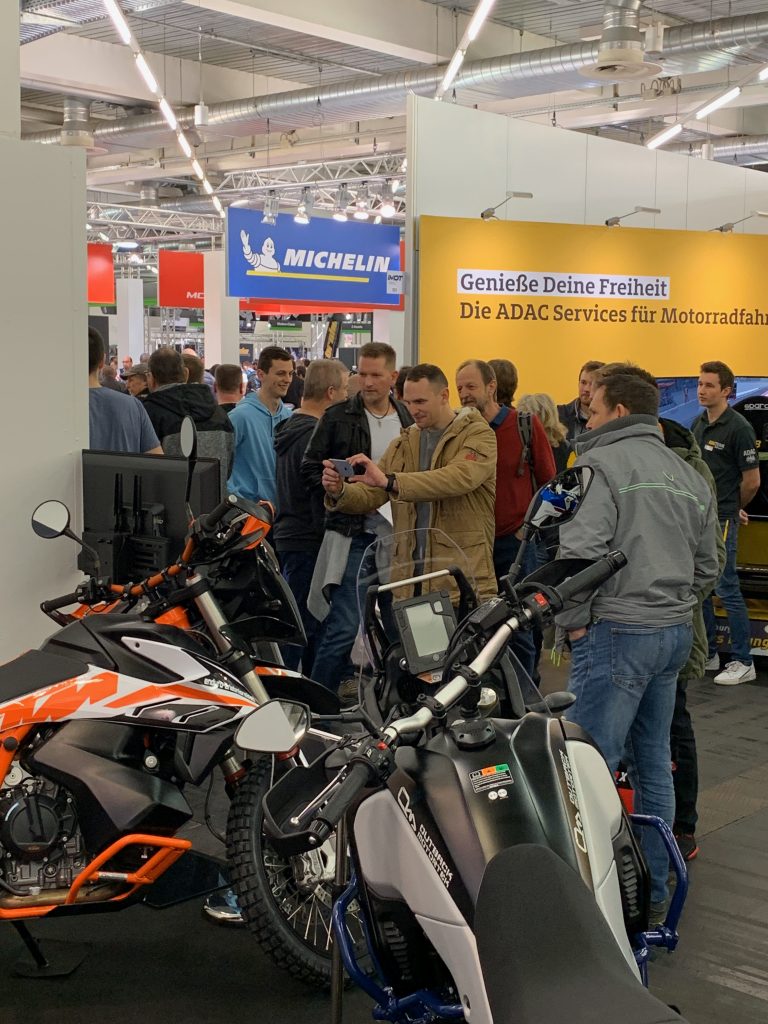 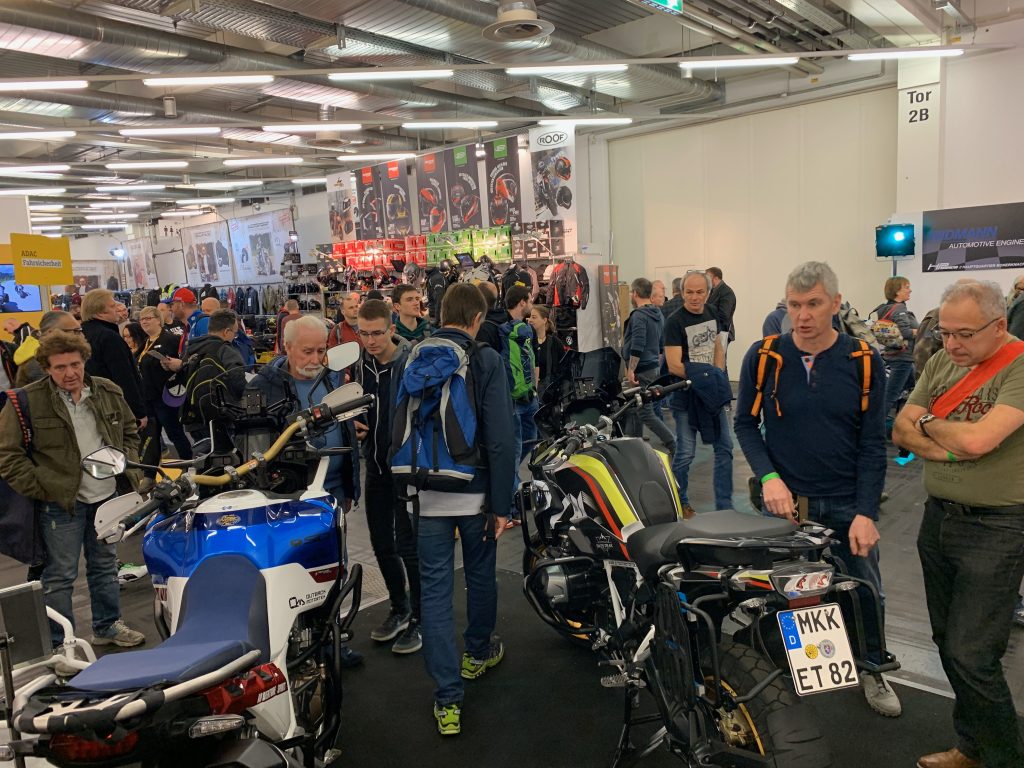 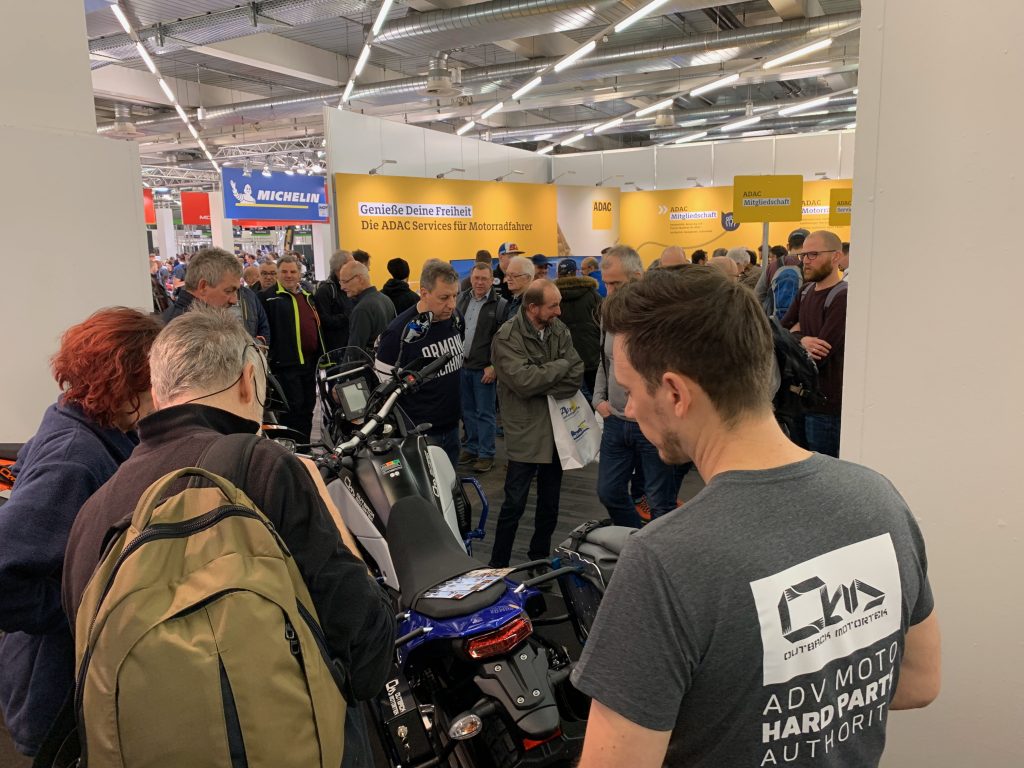 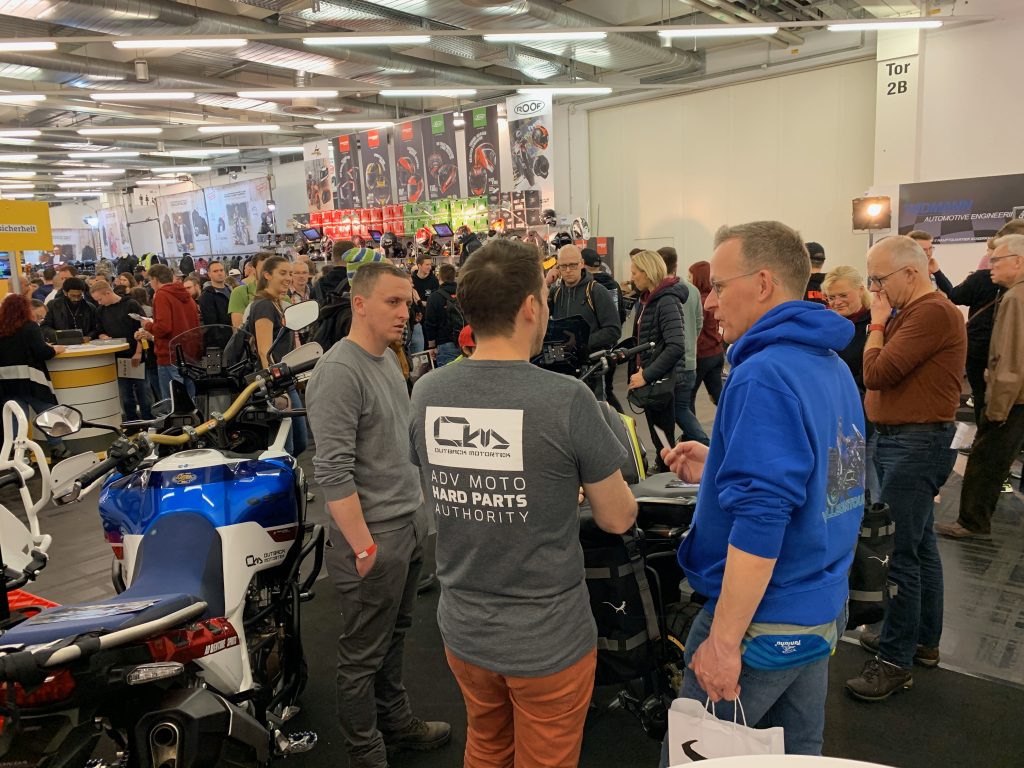 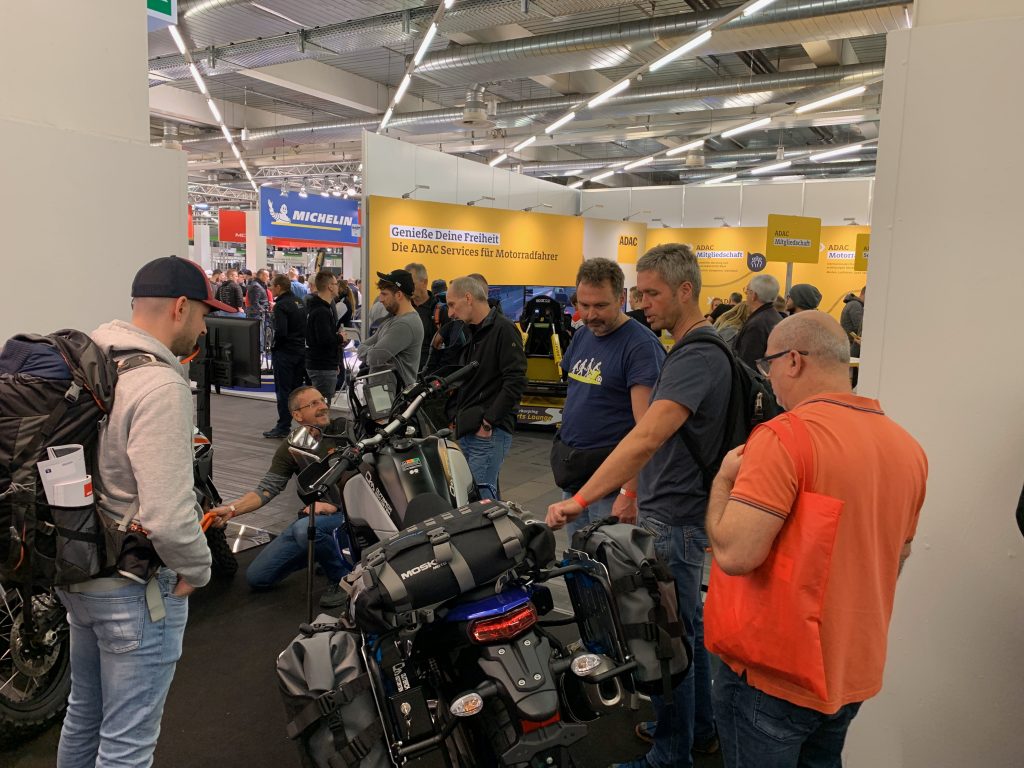 In the end, it was an amazing experience being in Munich to support Thomas at his first motorcycle event as German/Austrian dealer. I even managed to meet customers who purchased directly from us prior to Thomas taking over representation. I always find it an honour to meet customers in person. Here’s to hoping I’ll continue meeting more of you out there!