Final(ish), I should say. This is the stage when things become serious. Really serious.

It goes without saying that the BMW R1200GS LC crash bars development has been serious from the get-go. At this stage however we have a lot to lose, should one of the crash bars components fail. I mean fail so badly that it damages our very own 1200GS LC Rally edition.

By now we are confident that feedback from the previous two tests has given us that desired structure to properly protect the GS’s awkward, yet amazing boxer engine. And thus, we’ve begun the preparations for the final test and this time we’ve chosen some unorthodox methods to test our BMW R1200GS crash bars.

Yapping aside, it’s time for the actual torture test! Make it or break it. 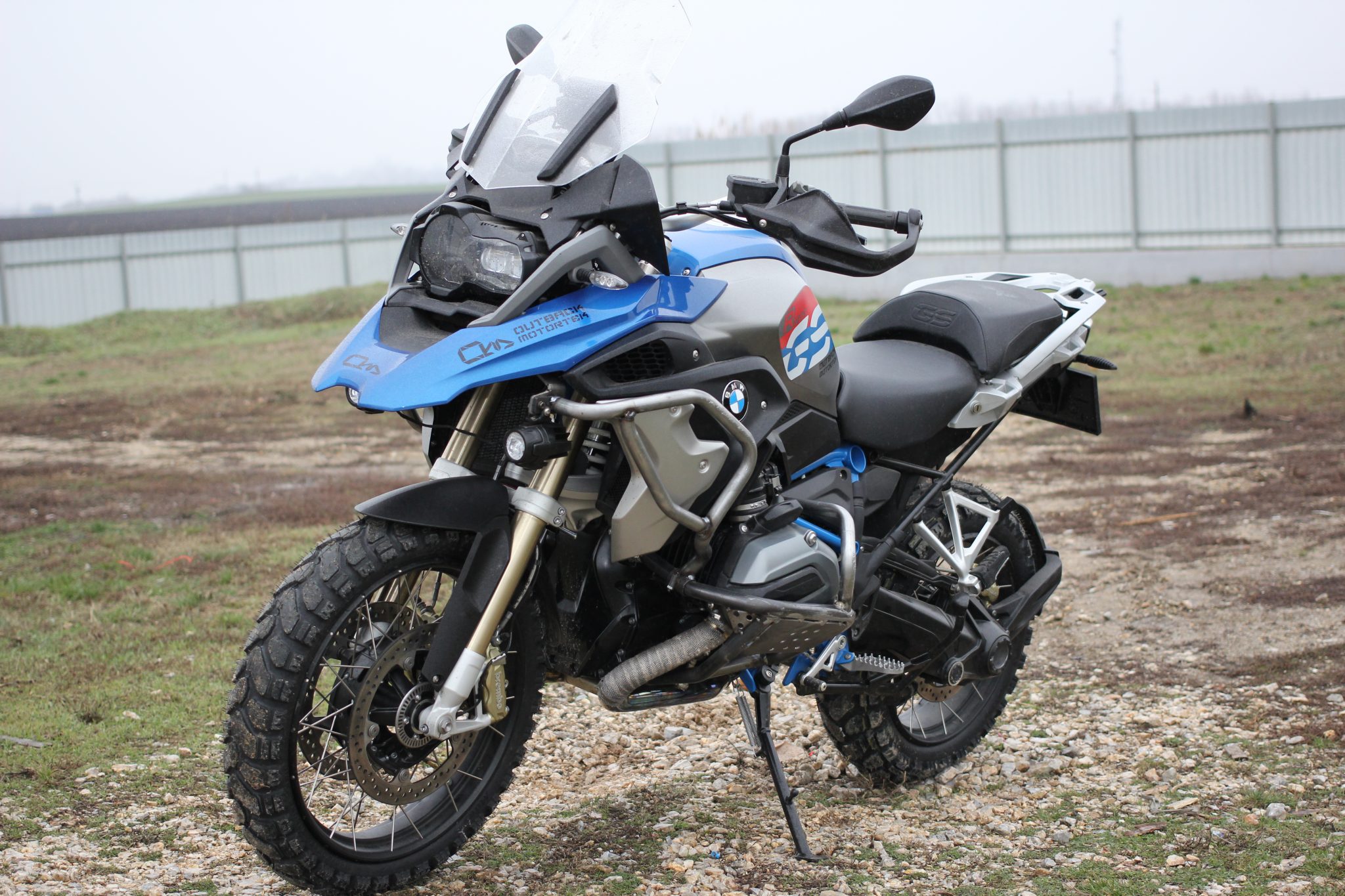 We put the beast in a spot where it would most likely land on some sharp rocks. It was inevitable that we would see results immediately and the biggest impact would be absorbed by the steel plate we welded on the crash bars tubing.

Now, hang on to your hat! As I said, we decided on some unorthodox methods to pull off this epic crash bars torture test on the flagship of all the adventure motorcycles out there! 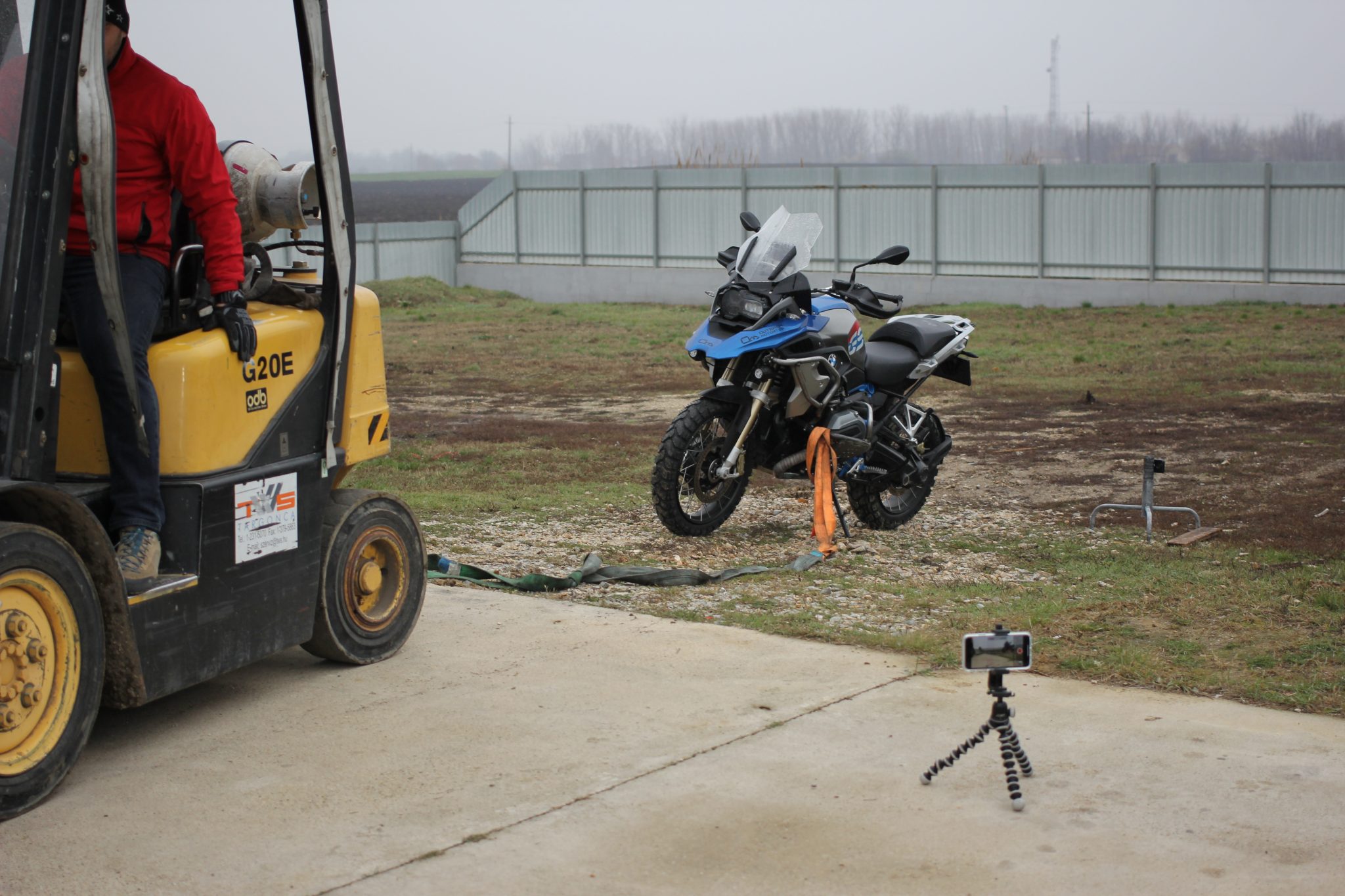 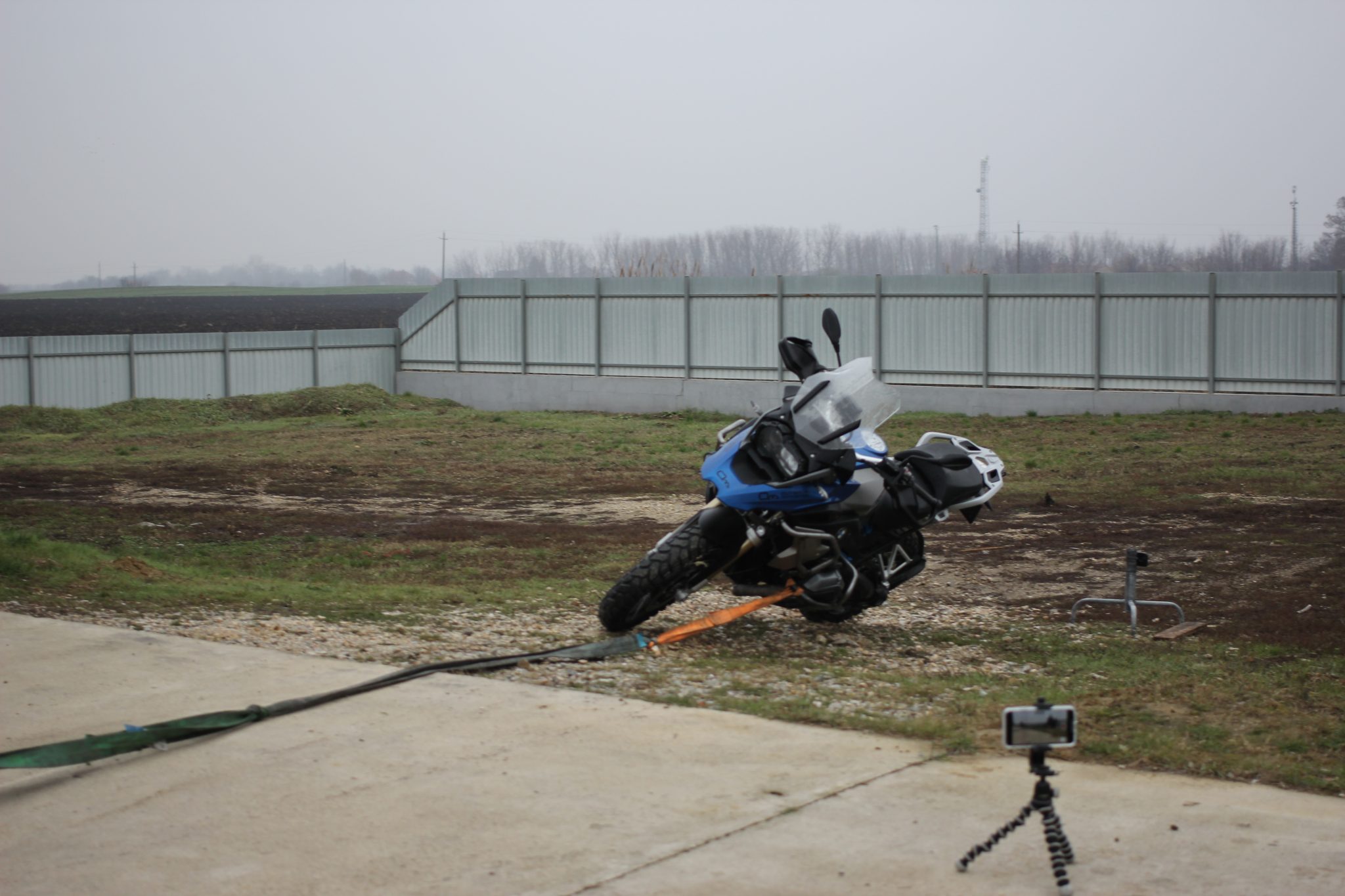 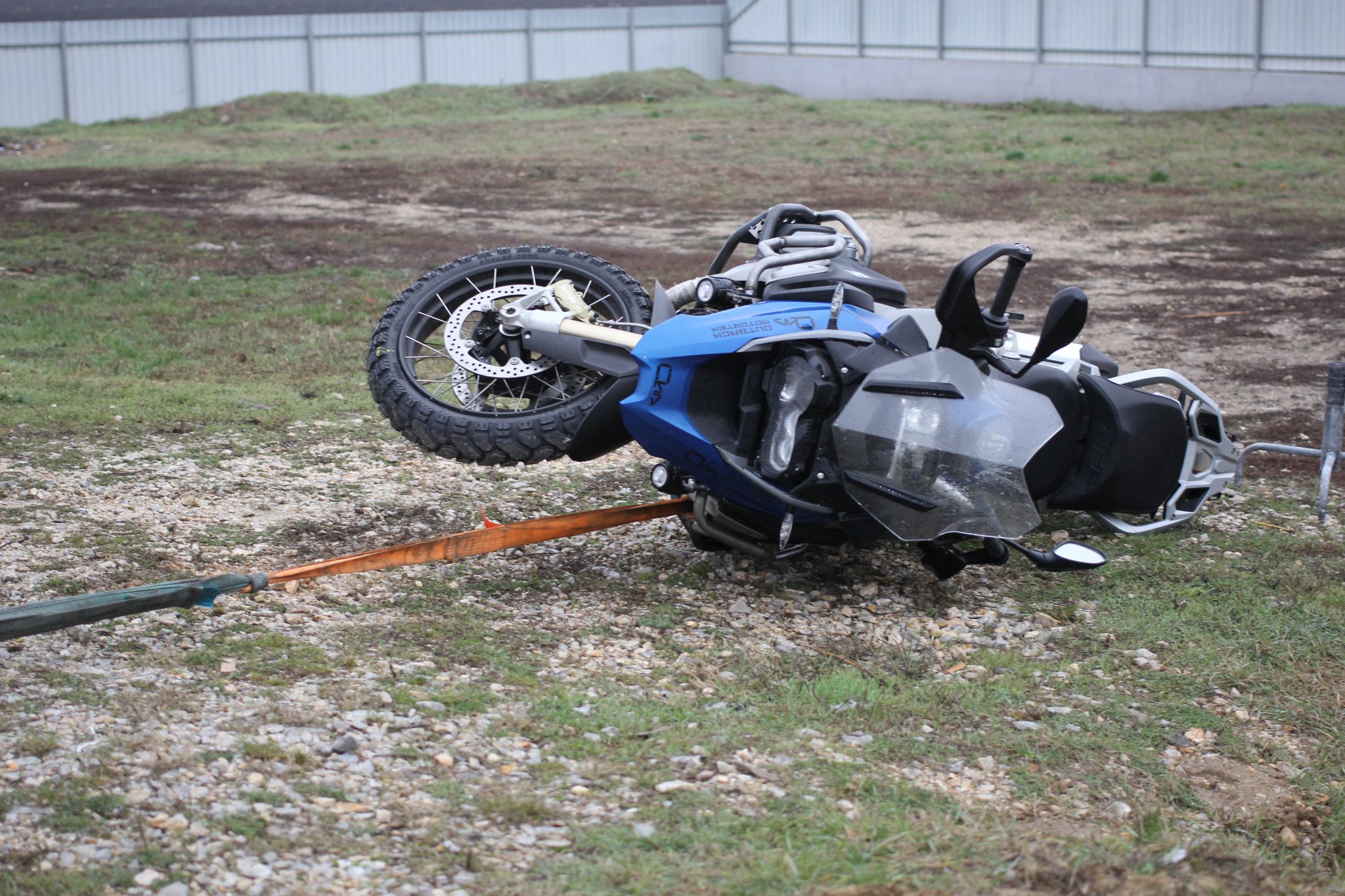 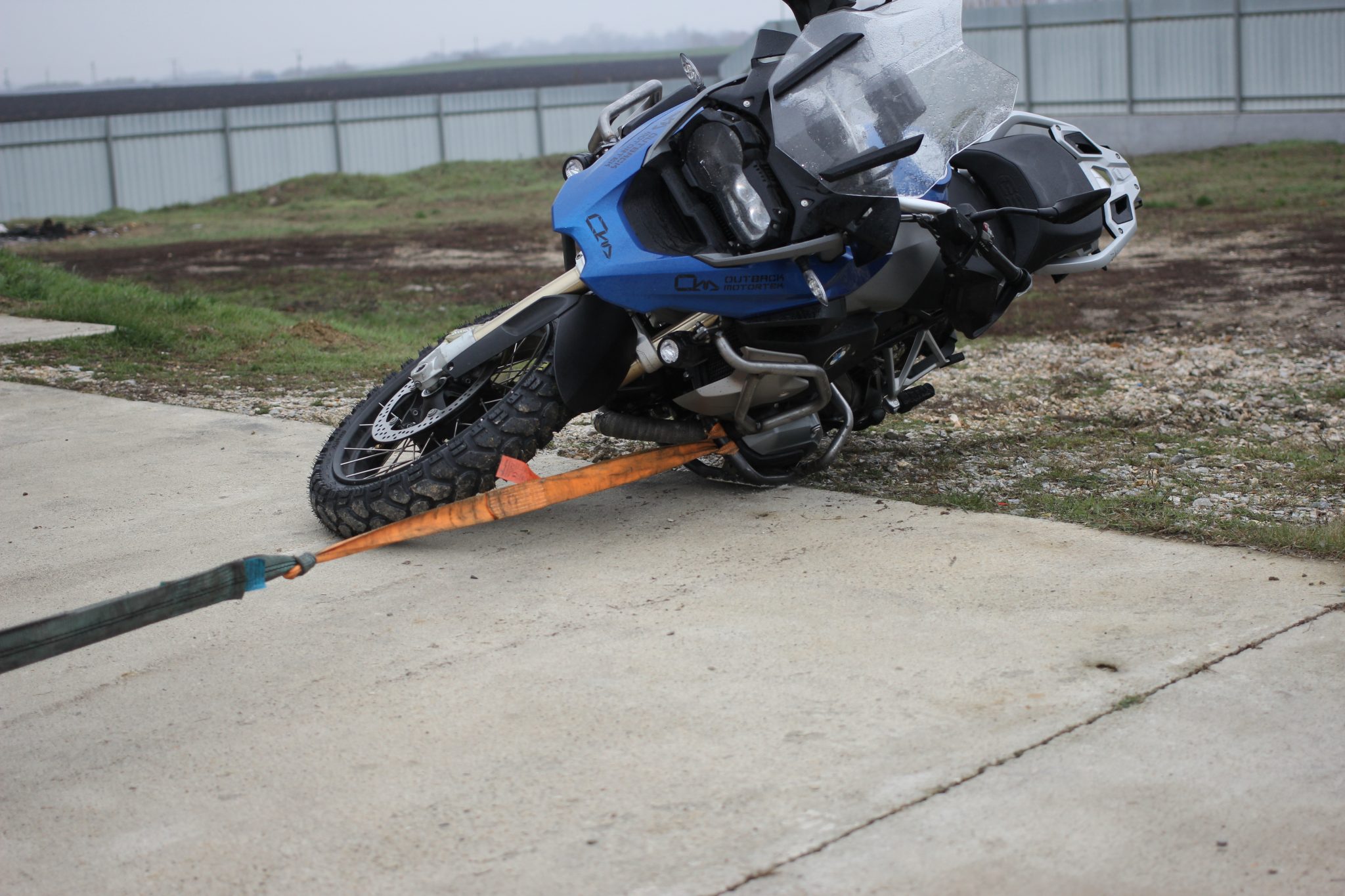 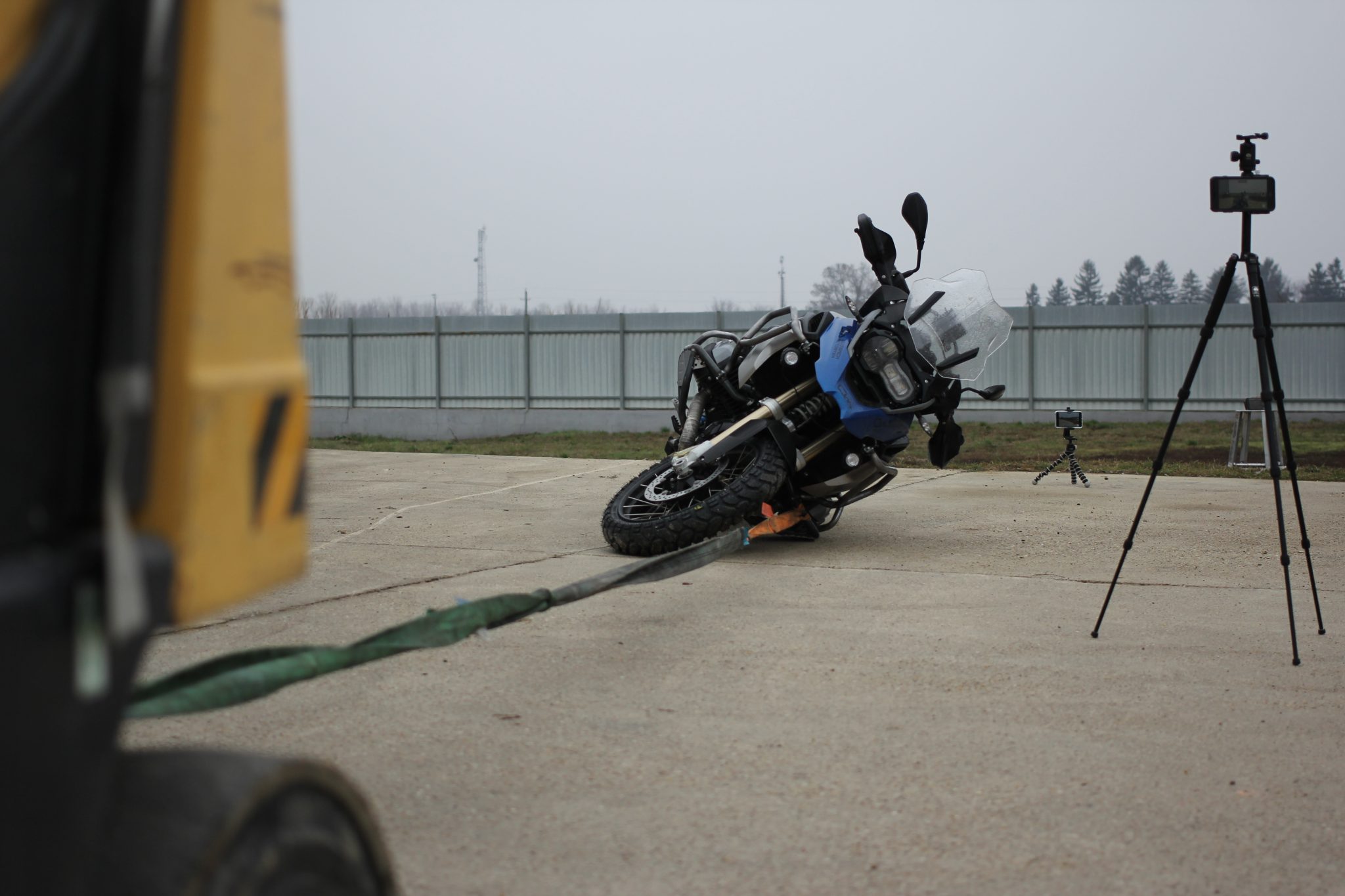 Nerve wrecking, I must say but if we want to excel in the crash protection category of the R1200/1250GS, then we think it’s the way to go. We’re gaining experience using our own motorcycle as opposed to getting (negative) feedback from actual customers.

Let’s see the results from this 7 meter drag test. 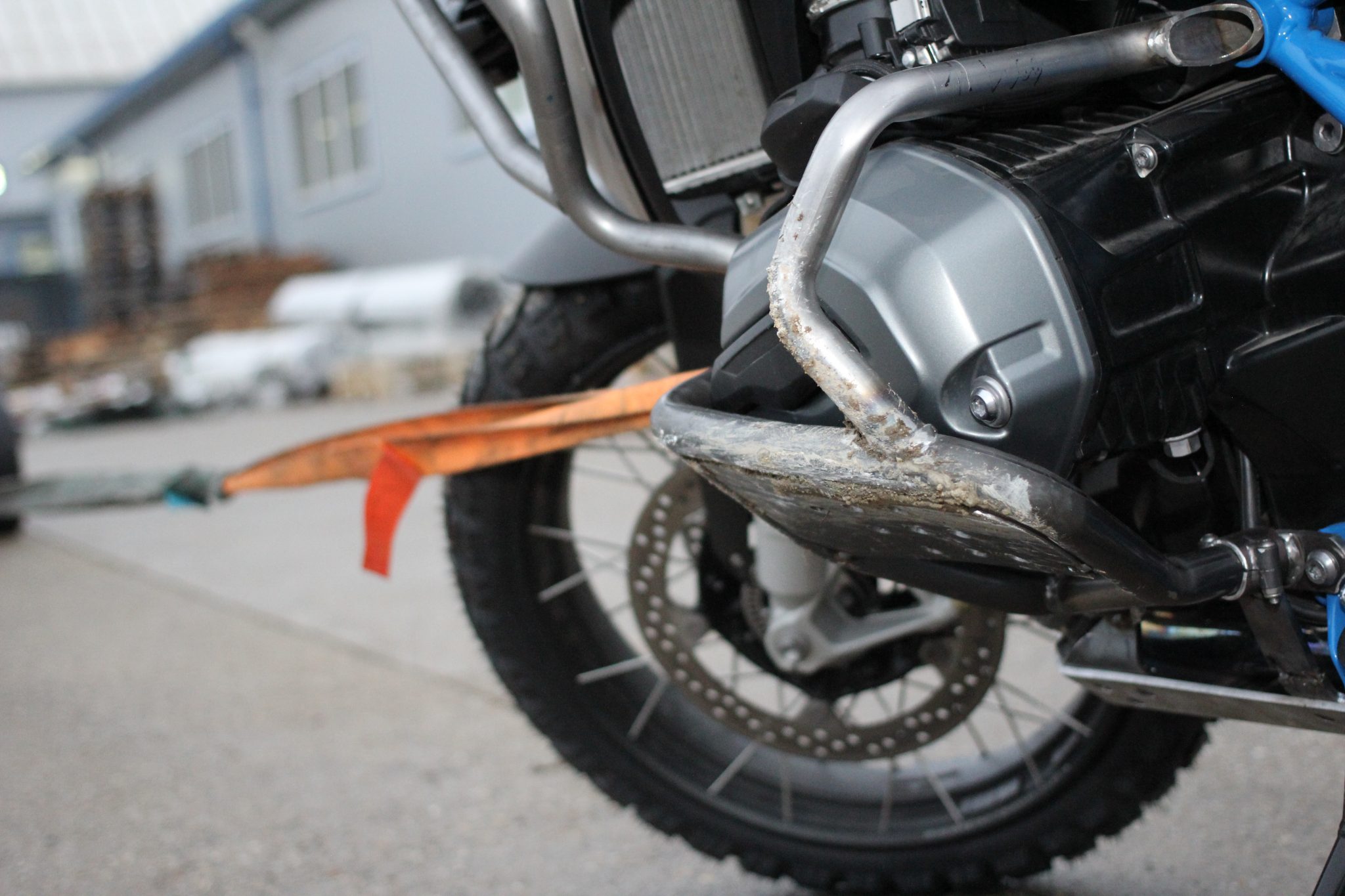 Shocking. Even the upper crash bars got scratched! Good thing we have developed them as well to complement the lower crash bars.

The cylinder head is still intact. However, the left side lower crash bar has been badly abused. The most noticeable damage is to the top vertical tubing. It’s bent out of shape. It’s certainly dealt with a lot of impact due to the weight of the bike but can it handle another test? 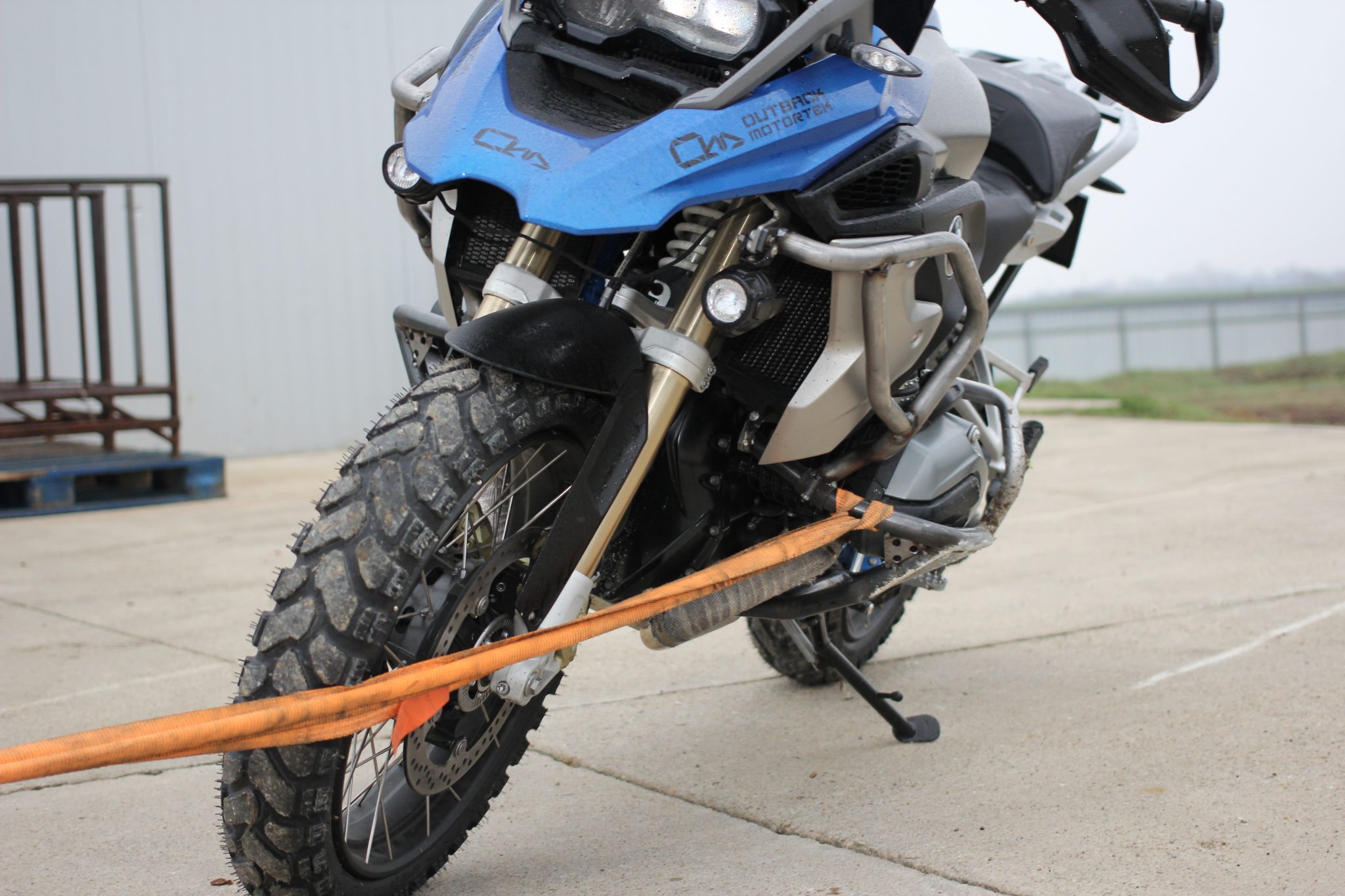 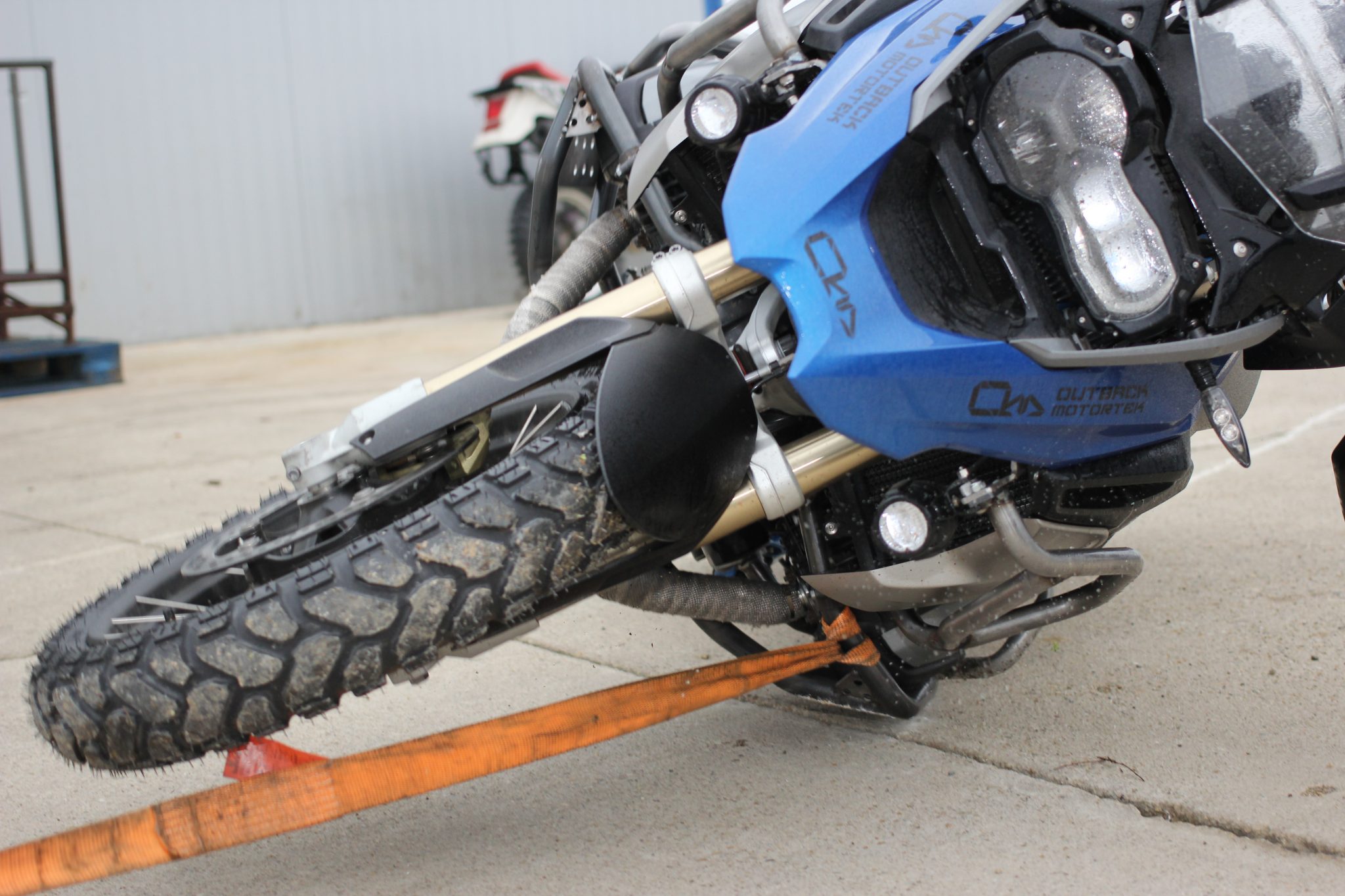 We ruthlessly let the bike slam against concrete ground prior to being towed again by the fork lift. Yet another shocking impact. This has got to break something!! 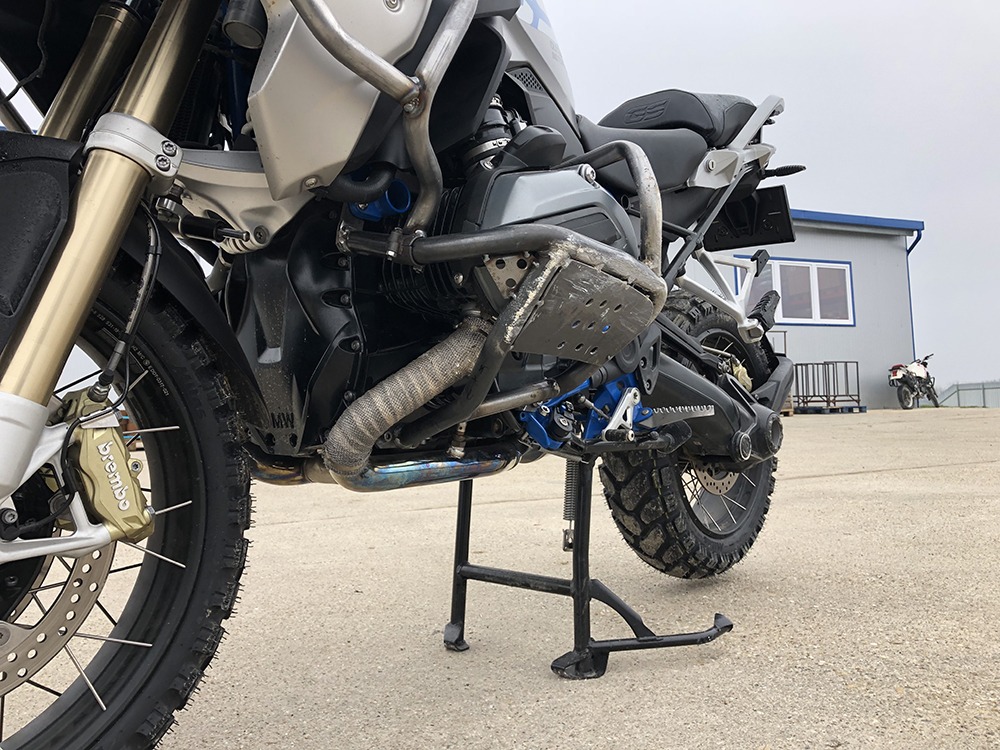 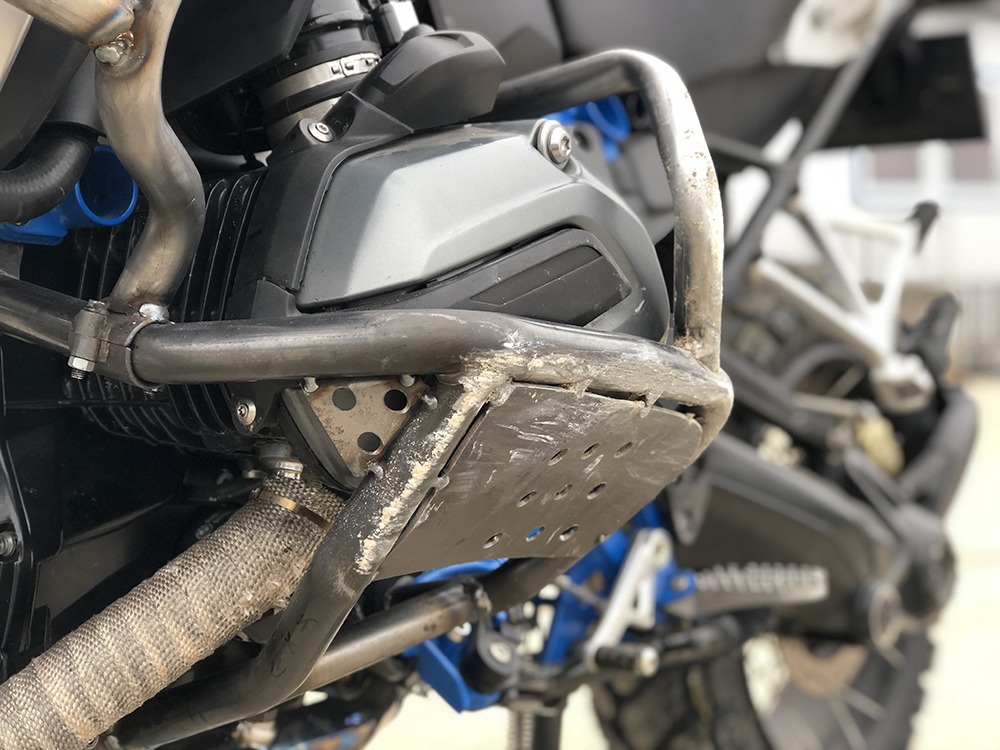 Nothing broke. Not on the 1200GS anyways.

Are we satisfied with the results. Not entirely. Now we have some hard facts at our disposal. We recorded high resolution videos using our iPhones setup in different angles. Slow motion videos will provide us with tremendous feedback.

Improvements? Now we know what to do to get ready for the final, most groundbreaking, most unforgiving crash bars torture test we’ve produced sine 2014.

Stay tuned. You won’t regret it.