Life’s full of surprises. Initially I had wanted to feature one of our combo packages but I just received a photo from a customer who was riding in Arizona when the unusual accident happened.

Even more unusual what saved his F800GS Adventure from literally close to a $1000 damage. Read on to find out.

So, this week’s featured product from Outback Motortek is the rear luggage rack for the BMW F parallel twin series, namely the F700/800/800GSA models.

To be frank, there are a lot of rear luggage racks on the market. There are some really good ones that are made to be used for, well, carrying luggage. Some are just decorative elements to make your bike look better. And some are just flimsy, cheap to cut corners and be competitively priced.

The Outback Motortek rear racks are not the cheapest, I admit it. It’s a decision we made. Here’s a list of features we included and I hope it justifies the price tag.

So, what exactly happened to this customer of mine that interrupted my plans to introduce a different product?

A crash. It’s quite normal when you ride a beast off road. He was riding in Arizona when he flipped(!) his 800GSA and surprisingly his rear luggage rack that he previously had bought from Outback Motortek saved him a lot of dollars. At least on the rear end. Other parts of the bike were smashed up pretty badly. 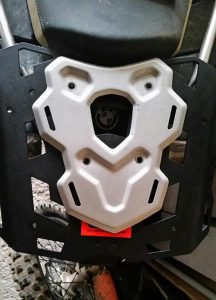 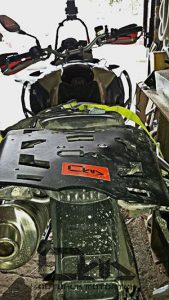 A quick look at BMW F800GSA parts price list confirms that he could have ended with a bill just like this:

That’s roughly $880US/$1189CA and it does not include the installation charges.

Conclusion: an accessory that serves as a luggage hauling product can be – with the right engineering – a protective accessory as well. We’ll however keep it for carrying your luggage and will NOT advertise it for such purpose. It’s safe to say though that a $130 investment into our luggage rack is well worth the money.