Quality exposure. That’s our preferred way of putting our products out there and what better opportunity than working with ADVMoto Magazine on a test and review carried out by a professional off-road rider.

Some of you may have heard of Bret Tkacs, owner of MotoTrek YouTube channel. Paying attention to his tips and tricks, you can learn to improve your off-road riding skills and other useful things related to adventure motorcycle traveling.

Bret’s also the co-founder of PSSOR (Puget Sound Safety Off Road) where they train thousands of adventure riders annually to better their off-road skills.

It was an honour to have our Triumph Tiger 800 crash bars and skid plate tested by such skilled off-road rider. Can we say that we’re happy with the results?

Let’s find out what Bret had to say about our protective accessories after a long-term test.

“It takes something special to stand out in the current world of ADV protection, but Outback Motortek has found a way to do just that. Rather than just make parts for the Triumph Tiger 800XC (and all other Tiger 800 models, edit by OM), they’ve designed a full protection system that uses interlocking components to reduce stress at attachment points.

The crash bars are divided into two sections per side with a robust cross member to tie them together, plus the skid plate. Installation was straightforward, but I noticed some left-over, strange-looking brackets. It turns out these brackets address two of the greatest weaknesses of other crash bar/skid plate combos produced for the Tiger—the low-hanging oil and the engineered-to-fail rubber-dampened mounting bolts. Outback Motortek builds crash protection for a variety of motorcycle brands and models but it is the interlocking design of the crash bar/skid plate combo they sell for the Tiger 800, Africa Twin 1000, Suzuki Vstrom 650 that stands out as a complete protection system.

Arguably the greatest weakness of the Tiger is the low hanging skid plate that uses the OEM-designed fail point of rubber-cushioned mounting bolts, which rip apart upon a heavy impact. Most aftermarket plates utilize these same bolts. This designed failure point protects the bike from having the mounts ripped from the engine. To protect the engine sump from impact, an effective skid plate needs to be fairly thick. The 4mm-thick aluminum of the Outback Motortek solves the issue, but not the one of it being ripped off the bike due to the sacrificial bolts. To solve this, I returned to those strange-looking brackets with the mounting kit. It turns out that they shift the two most critical mounting points of the skid plate from the engine’s fragile oil pan to the crash bars. As an added benefit, they also strengthen the crash bars. Outback Motortek crash bars use eight mounting points, which is more than four times as many as some of its competitors.

Once installed, the Outback Motortek crash bars wrap tightly around the engine cases and radiator, and reach to the back on the engine behind the shifter, the lower motor, midway up the front of the motor and then the frame, where the motor mounts hold everything together. The final point of strength is that the five-piece design uses technology similar to bridge construction in that each of these pieces bolts to another part of the crash bar or skid plate, reinforcing the total strength of the entire system. Having the skid plate attached to the crash bars is a critical detail as the Tiger 800XC, like many other modern ADV bikes, uses a free hanging motor and no lower frame to mount on. 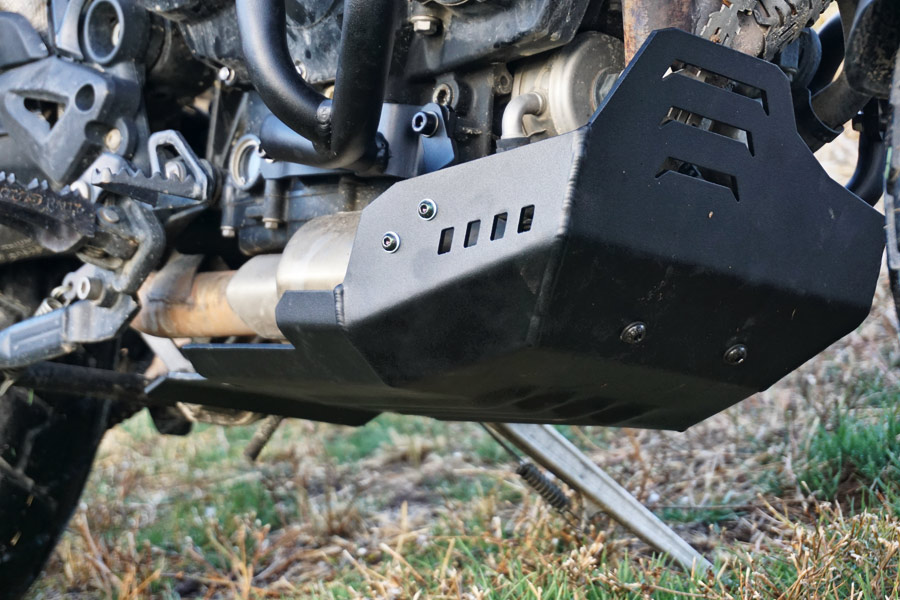 After the install I took the Tiger 800XC out and ran the protection through its paces, bouncing off rocks and deliberately dropping the Tiger on both sides to test all the fragile pieces. In the end the Outback Motortek protection performed perfectly, without bending or allowing any bits to get scratched or broken.

My job is training adventure riders, as many as 4,000 riders per year. As a result, I see a LOT of bikes on the ground and a tremendous variety of motorcycle protection that gets put through its paces. The Outback Motortek crash bar/skid plate is one of the highest performing, best thought-out ADV motorcycle protection systems I’ve seen. To say that I do not hesitate to recommend the Outback Motortek products to my students and would use them on my own ADV bikes is a serious endorsement. MSRP: Crashbars—$329 | Skid Plate—$305 | Combo—$599 OutbackMotortek.com “