My experiences with soft vs hard luggage- Part 1.

My experiences with soft vs hard luggage- Part 1.

This seems to be the eternal debate within the adventure and dual-sport motorcycle riding community. They both have their pros and cons, like everything in life. Let’s take a look.

Given the fact that I’ve been riding these so-called touring enduros or more commonly known as adventure motorcycles for over a decade now, I’ve had the opportunity to try many options to carry my belongings on long and short trip around Europe, Asia and North America.

I used to be in love with aluminum pannier. I always thought they made adventures bikes look rugged and, well, adventurous, thus we had a pair made in my dad’s metal fab shop a couple of years ago as a preparation for my Central Asia journey. It was exciting as I tried to picture my Vstrom 650 and I passing through nomads land’s and storming though the cruel Asian deserts. After about a month in the journey I had a different perspective on hard luggage. I still liked them as they had great features no other luggage system could provide. But something had changed.

We fell a couple of times. Sometimes fell really hard. One could think “Of course, you might not be skilled enough to navigate a loaded bike off-road” but no. Aluminum panniers each weigh roughly about 30-40lbs/12-18kgs. When you’ve got three mounted on your bike it will add about…do the math. The biggest headaches are the aluminum top cases. With those bad boys mounted on the top rear-end, the bike’s center of gravity changes from bad to worse. 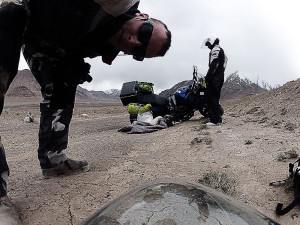 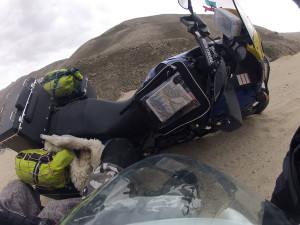 At least it was easier to pick up the bike from an 20° angle, rather than from a 0° angle.

Width is another issue I found to be a nuisance. It creates a lot of turbulence due to its poor aerodynamic features and could be hard to navigate through narrow passages or could accidentally hit obstacles. 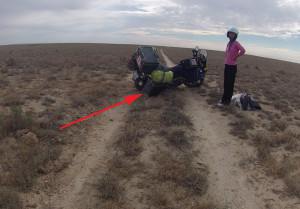 In this photo above, we were cruising through the Kazakh steppes when I hit a long, deep groove and I was immediately derailed. Unlucky for me, I just hit one of the hundreds of ants’ nest that was basically 30×40″ in size and hard as rock. Luckily though, the subframe didn’t snap but the pannier rack. The pannier itself deformed and it was hard to properly close the lid on it, therefore it lost its waterproof ability. Bummer!

Before you quit reading and think this story will end with a soft luggage sales pitch, I have a lot of great things to say about hard luggage. 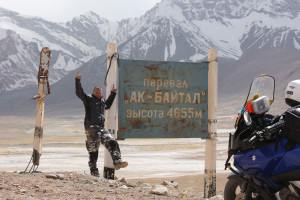 Obviously, riding off-road with these panniers mounted takes a lot of experience. But all the above can be managed fairly easily if you don’t do what I did in Central Asia.

I certainly did like the safety part of my hard cases. I could leave my bike in any Central Asian city without being too worried about its precious content, like a DSLR camera, GPS, GoPro etc.

These hard panniers also make great use of a makeshift table and/or stool. I preferred cooking on them rather than placing my camp stove in dirt or mud. Better yet, a pannier can be placed under the bike to perform tire removals in the boonies in case of a flat tire. Plus, food can be safely locked in there while camping in bear-land.

Also, it was really convenient to remove these boxes and carry their content without any hassle to play around with straps or roll tops. With the pre-installed hooks on the top, we could extend their capacity and place drybags or any other light luggage on top. They’re pretty water and dust proof. That means you will take out your clothes the way you put them in. That is if they’re well-made. Be aware though, there are a ton more under-qualified panniers than you think than the ones that are actually reliable and tough. Often times the rule of thumb is “you get what you pay for”.

When you see an adventure bike that has really seen some ultimate journeys, you will notice stickers on the panniers. It raises the “ADV factor” tenfold. People will want to see where have you been and will want to know stories of the “most dangerous”, “most beautiful” etc. places. Guaranteed you will make a lot of friends if you stick to your panniers. 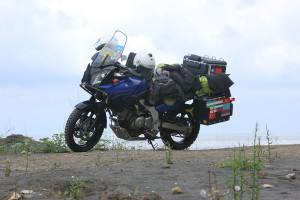 These are great pros to have and could very well balance the cons and for some, they are and will always outshine the cons.

Of course, as I mentioned earlier in this post, I used to be in love with aluminum panniers but I’ve switched to soft luggage recently and if you stick around you can find out the reasons and examples why I prefer soft and how I fell in love with a revolutionary American product.