I‘m still puzzled to be frank. So, how did we manage to make it organically to a well-known German motorcycle magazine?

With the growth of Outback Motortek, more and more email and phone inquiries come everyday. It’s always exciting to learn why riders consider choosing us.

So, back it up to a few months and there I was reading a different title “Africa Twin product testing via Motorrad Abenteuer“. The name sounded awfully familiar as I’ve visited Germany many times and always picked up a motorcycle magazine or two. When an email like this one comes in, you just don’t know where to start! I felt that “rush” and my brain had a hard time processing what was written in the email. Probably for the third time I had managed to decipher the message: Motorrad Abenteuer is asking us to send them products for testing in their upcoming issue. A couple of things were going through my mind as this was an unusual request. 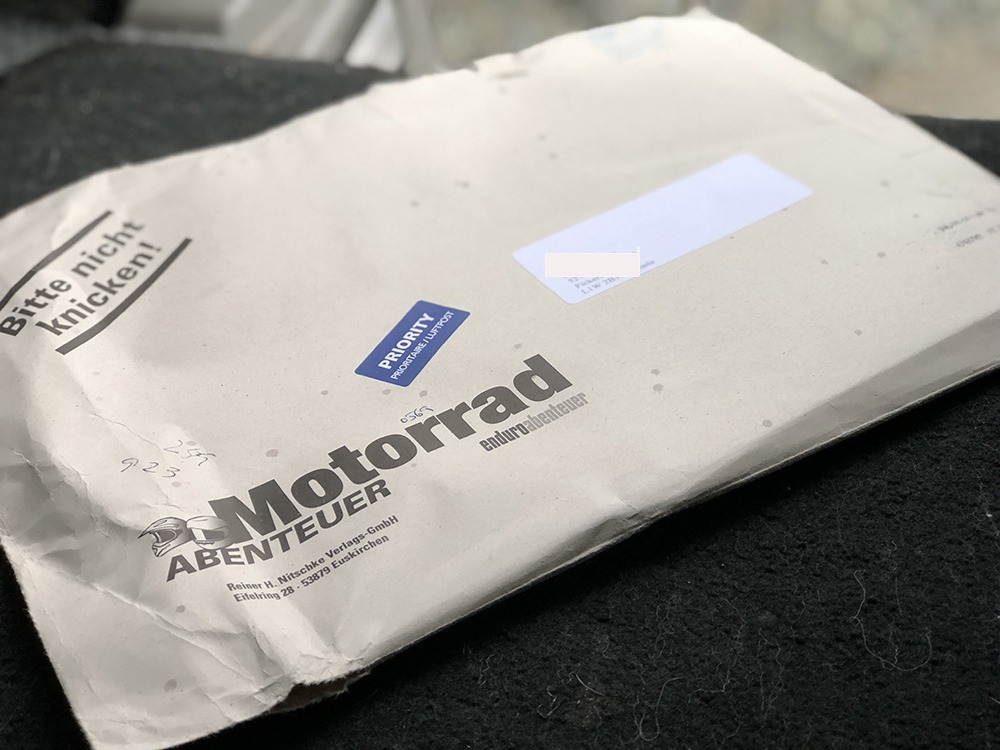 What do I say now? What do I reply? “Yes, please, of course”, should be the right thing to say.

And I did so. With pleasure. However, I was still somewhat skeptical. After exchanging quite a few emails, it turned that this article would indeed be fully organic and I wouldn’t need to sign up to advertise or pay even €1. It really was just thanks to the positive reputation of Outback Motortek has built.

There was, however, a small issue to overcome: timing. One of their test riders was just about to take the long-term Africa Twin 1000 test bike to Poland and it’d be “perfect” to have protection installed on it, they noted. Our parcel partner TNT/FedEx took care of it and in two days Motorrad Abenteuer received an Ultimate Protection Combo!

Fast forward to July and I was holding the magazine in my hand and I didn’t have to go through all the 122 pages till the end to find the article of Outback Motortek. It was right on page #14 and #15! The online version is just below here.

Don’t understand or speak German? No worries, you can read the (roughly) translated English version below the article. 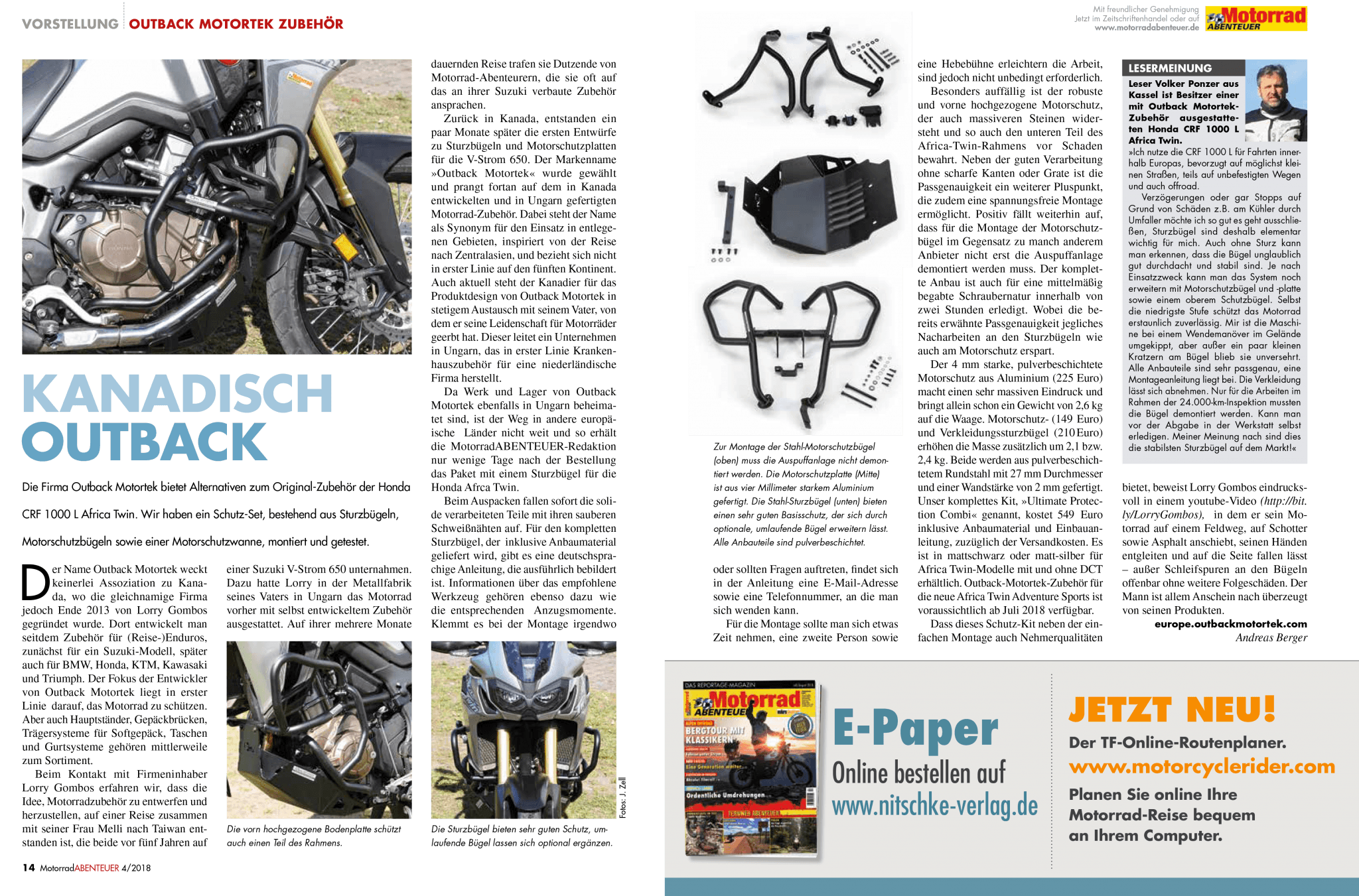 Outback Motortek offers alternatives to the original Honda accessories of CRF 1000 L Africa Twin. We have a protection set consisting of crash bars, engine guards and a skid plate. Assembled and tested the combo.

The name Outback Motortek brings no association with Canada, however in late 2013 Lorry Gombos founded his company just outside of Toronto, ON, Canada. There he began to develop accessories for adventure motorcycles. First for a Suzuki model, later on also for BMW, Honda, KTM, Kawasaki and Triumph. The focus of the developers has always been and still is crash protection but they added centre stands, luggage racks, pannier racks.

For this purpose, Lorry and his father had previously equipped the motorcycle in the metal fabrication factory established by Gombos family in Hungary. During the months of their journey across Asia, they met dozens of motorcycle adventurers who quite often complimented on the parts made for the trip across the continent. A few months later back in Canada, the first designs for crash bars and skid plate for the V-Strom 650 began to outline. The brand name »Outback Motortek« was chosen and is now emblazoned on the motorcycle accessories developed in Canada and made in Hungary. The name stands as a synonym for the use in remote Areas, inspired by the journey across Central Asia, and does not relate primarily to the fifth continent.

Since the plant and warehouse of Outback Motortek are also located in Hungary, Motorrad ABENTEUER  managed to receive the parcel just in a couple of days.
When unpacking, we immediately noticed how robust the parts were, also featuring quality welds. With the accessories, we also received detailed installation manuals in German language.
For the assembly one should take some time, a second person is helpful as well but it is not essential.
Particularly striking is the beefy and high-raised skid plate, which protects the front of the engine and the exhaust headers from stones etc. Besides the good workmanship without sharp edges or burrs, the accuracy of fitment is another advantage of which also allows a stress-free installation. Another positive is that the exhaust does not have to be removed, as opposed to some other aftermarket protection. The complete installation can be done with minimal wrenching skills in about two hours. This is mostly thanks to the well-fitting products.

To prove the protection combo’s worth, Lorry demonstrates how well the products function in a YouTube video ( http://bit.ly/LorryGombos ), in which he throws his Africa Twin on a dirt road, gravel patch and finally concrete ground. The results speak for themselves as the bike escapes without damage. This man apparently trusts his products.